Relay for Life to move to a new location 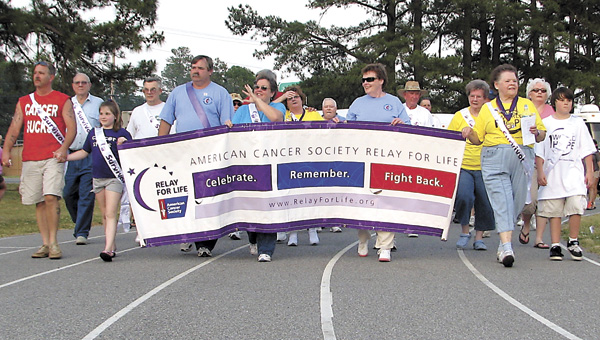 Cancer survivors take the survivor lap at the 2010 Suffolk Rockin’ Relay for Life at Nansemond-Suffolk Academy. The 2011 Relay will be held at Bennett’s Creek Park.

While celebrating the end of the 2010 Suffolk Rockin’ Relay for Life, event leaders are already making big plans for the next event.

The Relay will move to Bennett’s Creek Park in 2011 because of the growth the event has experienced.

“We were completely filled up at [Nansemond-Suffolk Academy] last year,” said Anne Barclay, community manager. “It was the first year that has happened. It was great, but there was no room for growth. We knew it was time to start looking.”

The event has been held at NSA for about 10 years, Barclay said.

As everyone knows, however, growth always comes with a few growing pains.

“We were a little worried we may lose teams by moving it north, but we want to remind people that the event only happens once a year,” Barclay said. “The meetings will be at King’s Fork fire station, which is just around the corner from where they were before.”

The event’s burgeoning growth coincides with administrator’s hopes to broaden the support base of the event in the city.

“We have such a strong foundation of support in Suffolk, we want to expand that into the northern area,” Barclay said. “We really want to focus on incorporating the northern end of the city, too.”

Barclay also is seeking more diversity in other areas, she said.

“We want to incorporate more men, ethnicities and ages,” she said. “Cancer doesn’t discriminate. It affects all of us.”

Another change announced was the naming of the Relay’s chairman, Ginny Lee Leitner, and co-chair, Mason Copeland.

According to Barclay, Leitner was a caregiver and has been the leader of one of the event’s top fundraising teams. Copeland is a cancer survivor and past chairman and co-chair.

Barclay also said that of the 12 committee chairpersons who spearheaded last year’s event, about six that she knows of are returning.

Among the changes taking place, there remains one strong constant.

“The person that the team ‘Pink Pearls’ was started for passed away from cancer two weeks ago,” Barclay said. “Her son couldn’t come, but he said that now that his mother is gone, he will be fighting to find a cure even harder. Cancer hasn’t stopped taking lives. We still have a mission.”