Storm leaves a foot of rain 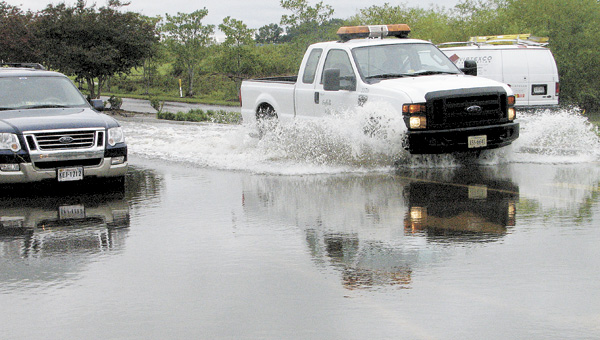 A city truck splashes through standing water in Suffolk on Thursday near a disabled vehicle. A four-day storm dumped nearly a foot of rain in most parts of Suffolk.

The massive storm system that moved across Suffolk this week dropped nearly a foot of rain in some places, the National Weather Service says.

“The rainfall amounts were a bit on the variable side,” said meteorologist Mike Montefusco at the National Weather Service office in Wakefield. The exact amount of rainfall in Suffolk depended on the location.

No matter where you were in Suffolk, you saw lots of rain. It was enough to cause dozens of accidents, close some roads, cancel school and flood homes.

Some residents near the Portsmouth Water Treatment Facility had flooded homes and yards because floodgates at the facility would not open, city spokeswoman Debbie George said. Emergency dispatchers received a call from the Portsmouth representative informing them of the situation, and one resident called to say water had come into his garage.

Police responded to the area and saw properties with standing water in the yards, George said. At the time, rain had stopped and water levels were dropping.

One lane of U.S. Route 58 also still was closed on Friday as Public Works crews cleared a storm drain in the median.

In addition, a flood warning was issued Friday because of the risk of the Blackwater River overflowing. The river had risen to flood stage by 9:45 p.m. Friday, the National Weather Service reported.

Too wet, too late