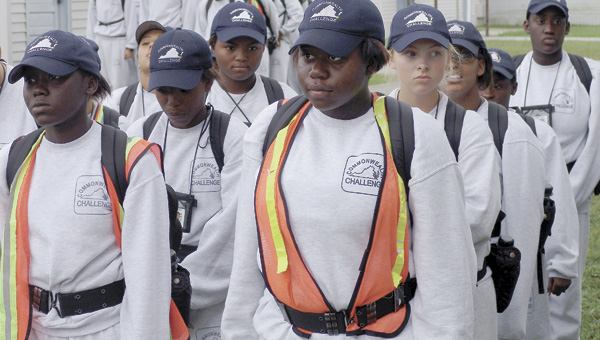 Cadet DeAndra Bazemore attended Lakeland High School and was involved in the infamous “YouTube” fight. She since decided to attend the Commonwealth Challenge and changed her life around. Here she is with her platoon.

Just more than six months ago, DeAndra Bazemore’s and Dyamond Alicea’s lives were headed in much different directions.

In March, Bazemore was one of the juveniles throwing punches in the notorious “YouTube” fight and Alicea was so depressed and had so many problems at home she was hardly attending classes.

Today, they are both excelling in the Commonwealth ChalleNGe and planning their futures.

Bazemore, 16, and Alicea, 17, are two of the three Suffolk teenagers who are enrolled in the challenge, the Virginia component of the National Guard Youth ChalleNGe Program.

“If it weren’t for this program, I’d have no future,” Bazemore said. “I probably wouldn’t be going to school at all. I’d be in bed or whatever, watching TV. Being in this program has me wanting to accomplish things. I have dreams. I’ve learned if you don’t have an education you’ve got nothing. Getting my GED is the first step.”

The Commonwealth ChalleNGe is a two-part program for at-risk 16- to 19-year-olds. It consists of a 22-week quasi-military residential phase followed by a 12-month, post-residential phase.

“Before I got here, I couldn’t even do one push-up,” Alicea said. “I cried when I saw the military stuff. It was hard-looking. Since I’ve been here, I’ve gotten really fit and back on track with the push-ups and running. It’s taught me that even when there’s an obstacle in your path, not to give up. You just keep going. When I get out of here, I feel like I’ll be able to do anything.”

At the end of the first part of the program, students have the opportunity to take the General Equivalency Diploma test.

“Our goal is to get our cadets GEDs and a second chance at life,” said Col. Tom Early. “The military model has worked since before George Washington. You bring them in, break them down and build them back up. They improve physically, in work habits, education and respect.”

Both girls are testaments to that.

“[My friends and I] used to fight just because it was hot outside,” Bazemore said. “The YouTube fight started because my friend was just telling me the same thing my mom was — to straighten up and get in school. I felt like she was attacking me though.

“I’ve changed now. I’ll never go back to my old ways. I was just too dumb to see the truth in what they were telling me.”

The second part of the program is a yearlong mentorship, where mentors help students follow through on the life plan they developed during the residential phase.

Both girls have plans to go into the Army after completing the mandatory 15 college credits.

“This place makes we want to do something,” Bazemore said. “At school, if you didn’t have a new outfit that day, you wouldn’t go to school. But, here we have uniforms and it teaches discipline. It makes you want to get up in the morning and do something.”

The residential program will finish in December, and both girls are eager to share the skills they’ve learned with their loved ones and friends.

“I can’t wait to go home and know I did something and completed something with no problems,” Alecia said. “I want to tell someone in the same situation I was in — skipping school — that they don’t have to settle for less. I don’t want anyone to give up. They can have the same opportunity I had.”

Smoke detectors: The sound of life