Dementia: Fighting for a cure 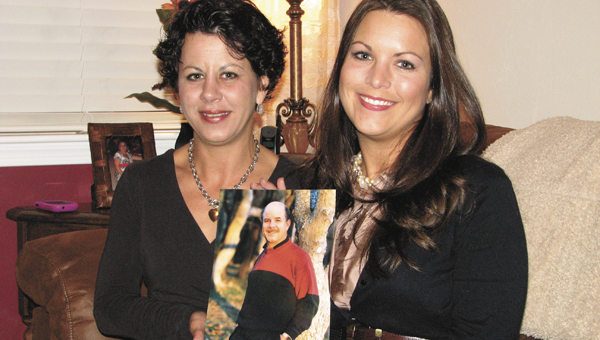 Ginny BonDurant, right, and Angie Wright are fighting hard to raise funds for dementia and Alzheimer’s research after losing their father, Jim BonDurant, to dementia. “It does more than make their body sick,” Ginny said. “It takes their soul. It leaves loved ones with a shell to love and care for, and when they die it takes a part of them, too.”

James “Jim” BonDurant turned from a loving father to a “caveman” in less than five years.

It began when his daughter, Ginny BonDurant, received a phone call in 2004.

“He called and said ‘I don’t know where I am. I need you to come and get me,’” Ginny said. “I went looking, but he was right next to the Firestone. He should have known where he was. We’d lived in Lakeside for 10 years.”

Later that year, he was diagnosed with fronto-temporal lobe dementia and told he had about five years to live. It was not long before his daughters lovingly began to describe him as a “caveman” because he was not the man they had known.

Jim’s ensuing struggle with dementia spurred the involvement of Ginny and her older sister, Angie Wright, with the Alzheimer’s Association Memory Walk on Oct. 16.

Jim was an active member in Rotary, the Chamber of Commerce and United Way but left town almost immediately after his diagnosis.

“Looking back, we think he just didn’t want people to see him deteriorate,” Ginny said. “He was always the life of every party. He was a go-getter, intelligent and successful. It was sad to see him pull away.”

Jim soon came back to live with Angie in Windsor, and by that time, Ginny said, he had lost the ability to communicate. Angie holds back tears as she struggles to admit that his nodding at every statement was a façade.

As time progressed, the girls gave up on insisting he wear two shoes to the store.

“The doctors told us that the decline would be gradual and then one day our lives would change forever,” Ginny said. “You hear something like that, you leave, get lunch, a glass of wine, shake it off and don’t think about it. But they were right.”

Their once fun-loving father also became increasingly violent. Angie began locking the door to the room where she and her son slept.

“One day I was standing at the top of the stairs, turned my back to him and he threw a boom box at the back of my head,” Ginny said.

At that point, the two sisters knew the father they had been clinging to needed more help than either of them could give.

One of the most difficult things the sisters had to do, they say, was to legally document his condition. The sheriff’s office had to take him.

“To have to have your own father handcuffed, you can’t imagine,” Angie said through tears.

It only got worse from there.

The sisters went through a series of nightmares to find their father proper accommodations. Memory units wouldn’t take him and several nursing homes were deemed unsuitable. He finally found a home at Chesapeake General Hospital, a temporary facility, which kept him a little longer than most patients.

“They knew what was going to happen,” Ginny said. “He was dying. There was nothing to be done. We visited every day. Angie went in the day. I went at night. It was always an anxiety attack not knowing what kind of a mood he’d be in. One night he’d sit on my lap and I’d rock him.”

Another night, he took a bite of flesh out of her shoulder.

“But we knew it wasn’t him,” Ginny said. “It was whatever this disease was doing to him. There were nights I’d just stand there and watch him.”

The daughters that had become mothers almost over night were 27 and 39.

They had hoped to donate his body to science to help research a cure.

“Because he was so emaciated by the time he died, they wouldn’t take him,” Ginny said.

So, they are taking matters into their own hands.

Ginny is chairman of Young Adults Against Alzheimer’s. Angie is the co-chair of the Western Tidewater Memory Walk committee.

Both will be raising money and walking for “Team Jimbo” in honor of their father at the Oct. 16 walk.

“Someone has to do something,” Ginny said. “I’ve researched the numbers and I know that Alzheimer’s fundraising — compared to other diseases — is way down here,” she said, dropping her hand to the floor. “But I promise you, if you ask around, almost everyone you know has been impacted by it. We’re here to say we need help, and we need it now.”

To find out how to donate or be a volunteer in Suffolk’s Oct. 16 Memory Walk at Constant’s Wharf, visit www.alz.org/seva or call 459-2405.

It’s popular to assert that children who have attained their teenage years are so set in their ways as to... read more