More than 80 residents, present and past elected officials and political supporters turned out to a “meet the candidates” forum hosted by the Holland Ruritan Club Monday.

Hot topics included building projects, sewage, roadways and the building of a new school in the area. 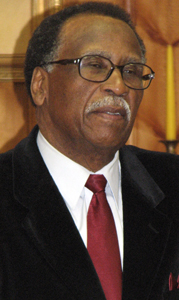 Many of the attendees had submitted questions to be answered by the candidates.

questions,” Worrell said. “We probably had between 30 and 40 submissions.”

The questions for the School Board included goals, top agenda items, their position on a replacement school, the drop-out rate, cooperation with City Council and the building of a new School Central Office.

Questions for the City Council included priority projects, goals, position on village plans, building a new city office building versus a new elementary school, sewage situation, cooperation with the School Board and roads. 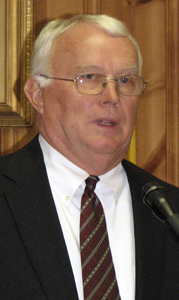 A topic that received much attention from both the board and council candidates was the building of a new school, which Worrell said was a main reason the forum was held.

Copeland said he wants a 600-pupil school in Holland, and then a rezoning of elementary schools to clean up “excessive transportation.” Then, it would be appropriate to look at the renovation of Robertson Elementary School.

Owen agreed two schools in each village would be ideal, but that the circumstances facing the Board are not ideal.

“I would love to see the two schools built in each village, but since it doesn’t seem that is an option, I’m in favor of building a school in between the two communities,” Owen said.

When asked their thoughts on the one school or two school concept, both City Council candidates agreed that it would be best to defer to the School Board members.

“I’m not a big fan of a big school,” Varney said. “But, I believe in your decision to put your School Board member in charge of that. If you don’t trust his vote, then it’s time for re-election.” 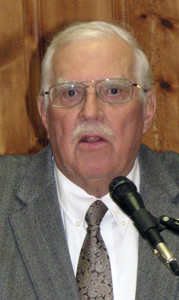 “I’m still standing willing and able to build wherever the School Board wants to build it,” said Gardy, emphasizing it is

On a related subject, candidates weighed in on how each planned to work with the other group.

On the Council side, Varney emphasized a relationship of give-and-take and mutual respect with the School Board.

“Listen, listen, listen,” Varney said. “Then give suggestions and then compromise. There has to be give and take. You’ve

elected them to guide and direct your schools.” 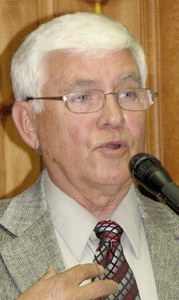 Gardy’s answer was that the two entities were not odds.

“Some people would have you think we’re at odds with the School Board,” Gardy said. “That is not [true]. We have

worked very nicely with them. We have sat down with the Board anytime they’ve asked and will do it again.”

On the board’s side, Copeland described his position as being “pro-council.”

“I feel very strong they can work together,” Copeland said. “I don’t think it’s something we can’t achieve. I believe Council and the School Board will be able to sit and discuss things in a cordial and delightful manner.”

Similarly, Owen said he felt it was “extremely important” for the two to work together, adding a recommendation.

“City Council and the School Board should have work sessions once or twice a year to discuss what is best for the citizens of Suffolk,” Owen said. “They need to listen to you, communicate and compromise, maybe. Both bodies are your servants. It is one of my main pushes to make sure communication and cooperation improve.”

After two hours of questions and answers, organizers felt it was a success.

“We hope to be able to do something like this on a regular basis,” said Donald Worrell, Holland Ruritan Club president. “We’d like to have meetings twice a year for our Council member and School Board member to come out and update us on what is going on.”

“It really brought out a lot of people and hopefully answered some questions people needed answered,” said Roseland Worrell, who helped organize the event. “It was the first year we did something like this. The school issue is what initiated things this year because so many people were asking questions.”