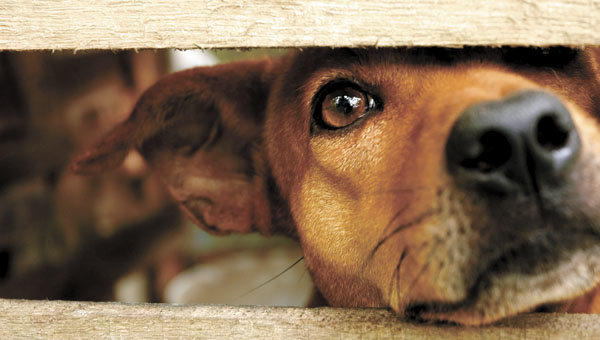 Four jovial dogs bound around Brown’s yard, playfully nipping at each other’s heels and jowls, happy to be out of their pens and exploring the yard. There is Ruby, a small brindle pit bull mix with a heart of gold; Sammy, a yellow-colored terrier mix who just wants a good rub on the noggin; Cody, a black and white border collie mix with more energy than a car battery; and then there is Blake, a shy pit bull mix that’s still learning to trust. 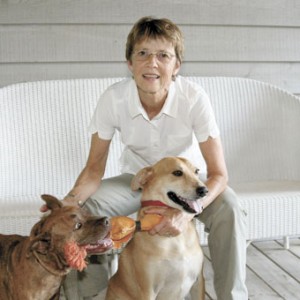 Amy Brown shares some time with “Ruby” and “Sammy,” two of the four fostered dogs currently in her care through PAWS of Hertford County, NC.

While each of the dogs is noticeably different, all face the same need — finding a ‘forever home.’ In this idyllic country setting, these four dogs have escaped shelter life and possibly death because of Brown’s generosity.

“Since I moved here 30 years ago, I’ve always been concerned about these dogs and cats and how society in general treats them as throwaways,” she said. “People don’t always take good care of them, either abandon them or take them out to the shelter.”

The American Society for the Prevention of Cruelty to Animals estimates that five to seven million companion animals enter shelters nationwide, and well over half are euthanized.

Shelter resources are too limited to house every homeless animal, and pet foster families play a vital role in saving potential companions.

JoAnn Jones, who chairs the group PAWS (Protecting Animals Worth Saving) of Hertford County, N.C., said fostering animals in a shelter helps free up space in the facility.

“It can mean the difference between life and death,” she said.

PAWS was established in 2006 by a group of concerned citizens with three main goals: to begin a responsible adoption program within the area, to improve the conditions at the county’s shelter and to promote the spaying and neutering of dogs and cats.

For its foster program, the organization offers to supply food and litter for foster animals, and foster parents are not responsible for any vet bills incurred while animals are in their care. The organization currently has five pet foster families, including Brown’s.

Brown admittedly has a soft spot for the shelter’s tough cases.

During the past few years, she has fostered approximately 10 dogs, including the quartet currently in her care. Nearly all, she said, were on the verge of being euthanized due to shelter overcrowding and other issues.

“It’s so hard to be around dogs that you know they’re great dogs — they look you in the eye and you can see it — they’ve got great personalities, they love people, but you just know they’re not going to make it,” she said.

During an adoption event held at ACE Hardware in Ahoskie, N.C., she decided to foster Cody. Brown explained that at the time of the event, Cody had been at the shelter for five months, and it was taking its toll. The dog was losing its hair because of stress — not the best first impression for interested parties.

To help Cody overcome his one fault — nipping — she’s been taking him to see a dog trainer who specializes in dog aggression at the University of North Carolina at Chapel Hill. Cody’s border collie genes, she believes, predispose him for a herding instinct.

Another dog, Blake, has other problems.

“Blake is probably the hardest one I’ve had to foster,” she said. “I got him in February, and I still cannot catch him. He’s so scared of people, but he’s getting just a tiny bit better each day,” she said.

In Suffolk, Va., Linda Vetter is also doing her part to save lives, two of them just recently. A pair of German shepherd puppies recently found their forever homes after spending time in Vetter’s care.

Vetter fosters for the Suffolk Humane Society, founded in 2007. Similar to PAWS of Hertford County, the organization strives to end euthanasia as a means to control pet overpopulation by promoting spaying and neutering.

The Suffolk Humane Society encourages fostering and has a network of those, like Vetter, willing to open their homes to pets in need.

Vetter said she has been fostering for the organization for approximately three years and has fostered 19 dogs. Since the time she was young, Vetter has always owned and been around canines, so giving back to dogs comes naturally.

“I do this out of compassion for animals, but also to pay back to the dog world for all of the companionship and love they have shown me,” she said. “It gives me a lot of joy.”

Vetter said no one knows how an animal will react to shelter life. Like her counterpart in North Carolina, she often seeks out the hard cases. At least three of the dogs fostered in her home had been the ones cowering in the back of their pens, she said. Those dogs are often skipped by shelter visitors for more extroverted dogs.

“Those dogs do not get adopted,” she said.

One of her first foster dogs was Ginger, a sheltie-rottweiler-setter mix, who was originally a stray running around two miles from her home. After catching the dog and checking in with the shelter, she began to foster Ginger, who turned out to have heartworms, one of many health issues facing the pup.

“That was hard saying goodbye, but I knew I had to free up space in my home for more fosters,” she said.

At one time, Vetter cared for seven, three-week-old puppies, orphaned when their mother was killed by a car. They were later abandoned by their owner, who left them on the shelter’s doorstep in 56-degree weather. Vetter got a call for her help, and so began her crash course in bottle-feeding puppies.

“When I got them, they were very lethargic and still hypothermic,” she said.

But the puppies had a voracious appetite, and Vetter and her fellow pet foster parent and friend, Cindy Conford, would feed the brood every four hours.

“They all survived and were put up for adoption,” she said. “Within two weeks they all were adopted. They all got good homes.”

Brown and Vetter agreed the significance of fostering goes beyond freeing up shelter facilities. Pet foster parents are able to assess the animals in a home environment, where behavioral and some health issues can be identified and resolved.

“Nobody knows what you’re adopting out. If someone comes into the shelter and says, ‘That’s a beautiful dog, I want to take it home’ and you don’t really know that dog and what it’s been up to — that’s the advantage of fostering,” said Brown.

Once the dog’s particular issues are identified, the pet foster parent can begin to try to establish a relationship.

“Often times there is one thing that will help you connect with them,” she said.

She remembered two particular fosters, including a 12-week-old feral puppy named Abby and a Chihuahua, now named Chuck, that she connected with in unusual ways. For Abby it was a bouncing tennis ball; with Chuck, a treat of peanut butter.

The assessment for fostered animals often goes beyond home as they are socialized in public places and observed around strangers, small children, cats and other dogs.

“You don’t have to be interested in training, you just have to want to take a dog in and treat it like any other dog,” Brown said.

On her farm in Powellsville, Brown spends time with her fosters on her screened in porch, patting their bellies and rubbing their backs. Sammy, the yellow terrier mix, sits in front of her wanting attention.

Brown calls him a “foster failure,” as he has been with her the longest. And she seems content with the idea that he will stay with her for the rest of his life.

But still she hopes he will find a forever home along with Ruby, Cody and Blake.

“I like to think of all of them as worth saving,” she said.