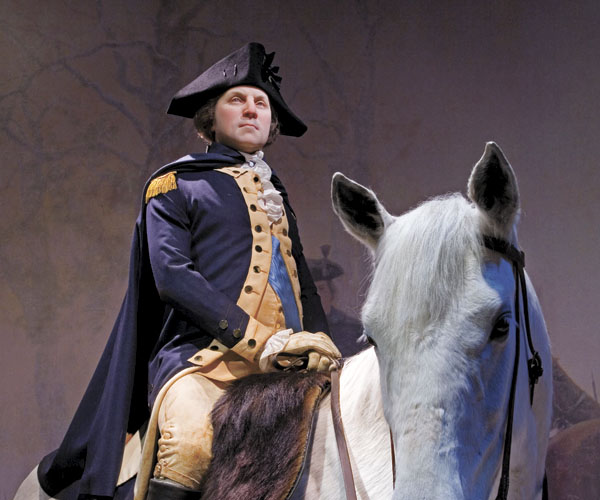 George Washington is shown here as the commander-in-chief during the Revolutionary War. This portrait is among approximately 100 interesting items on display through January 21, 2011 at the North Carolina Museum of History in Raleigh where the public can view the exhibit - Discover the Real George Washington: New Views from Mount Vernon.

When most folks think about American museums, they think of New York City and Chicago and Washington, D.C. The repositories housed in those cities are of such renown that people visit from all over the world.

But you don’t have to travel many hundreds of miles to find unusual, interesting, educational and enlightening collections of historic, artistic and cultural icons. No matter what your interest, there’s a good chance that one museum or another in Virginia and the Carolinas has an exhibit to suit your tastes.

Residents of North Carolina and Virginia have a rich variety of museums at their disposal, where they can view and sometimes even touch exhibits highlighting history, art, science, animals and the bizarre.

Read on for a list of 10 of the most unusual exhibits to be found in North Carolina and Virginia. They may not be the best-known of their respective museums’ collections, but they’ll be well-remembered by all who visit.

Graveyard of the Atlantic Museum

The Graveyard of the Atlantic Museum in Hatteras, N.C., is dedicated to preserving the maritime history and shipwrecks of the Outer Banks of North Carolina.

The Outer Banks’ are vital resources for understanding local, regional and national history. Long ignored, this legacy is in danger of being lost forever.

Among the most coveted of the displays located at the facility are the artifacts from the USS Monitor, which sank just 16 miles off the Cape Hatteras coast.

Admission is free. For more information about hours and availability of the museum, log on to www.graveyardoftheatlantic.com.

Beginning Oct. 1, the Jacksonville Center for the Arts (Floyd, Va.) will display art work inspired by the breathtaking views of the Blue Ridge Parkway in Floyd County, Virginia.

The show will feature a wide-ranging selection of displays, including sculpture, 2-D work and 3-D work. Approximately 25 people from Floyd County and the surrounding region will present their work, which is drawn from the mountainous region.

There is no charge for the display, which continues through Nov. 28. For further information, visit the Center’s website at http://jacksonvillecenter.org.

Emissaries of Peace: The 1762 Cherokee and British Delegations

This exciting new exhibit in Asheville, N.C. allows visitors to explore archaeological materials excavated from 18th-century Cherokee sites, as well as historical documents and British artifacts from the period.

The exhibit, which is located at the North Carolina Arboretum, tells the story of two powerful nations and their respective representatives who made diplomatic missions to each other’s capitals in 1762.

The Emissaries of Peace will remain open through May 15, 2011. Admission, which is in addition to the $8 parking fee, is $2 for youth and $3 for adults.

The Colonial Williamsburg, Va., Museum is currently offering a showcase on the life and works of Steve Harley (1863-1947), a relatively unknown artist who traveled the Pacific Northwest and was inspired by such places as Wallowa Lake, Wind River and Mount Hood.

The paintings, only five of which still survive, capture the natural beauty and are available in stunning color. All five paintings are owned by the museum and will be on display in the exhibition.

The display will be at the Abby Aldrich Rockefeller Folk Art Museum in Williamsburg, Va. For more information, visit www.history.org.

Housed at one of the premier Science Museums on the Atlantic Seaboard, the Reynolds Aluminaut: Exploring the Ocean Deep exhibit offers a unique opportunity for visitors to learn more of the nautical past.

The exhibit, which is located at the Science Museum of Virginia in Richmond, allows visitors to get a hands-on look and the chance to investigate density, effect of pressure changes in the ocean, corrosion and galvanic action.

All of this is possible thanks to the Aluminaut, launched in 1964 by Reynolds Metal Company. It was the world’s first aluminum submarine and, in its time, set a world record for the deepest dive by a sub.

Learn more about the exhibit at www.smv.org.

The Virginia Historical Society of Richmond, Va. has a unique collection currently on display at the facility.

The organization began its collection in 1831 and over a period of nearly 180 years a group of bizarre items has crept into the collection. The items are astounding, perplexing and even disgusting in some cases.

The collection includes such random items as the bullet that killed the first Confederate soldier, nails from part of the Capital that collapsed in 1870 and a silhouette cut by an armless Virginia woman with her mouth.

It also includes items such as strands of James Madison’s hair, a purported cast of Daniel Boone’s skull and a smallpox scab taken from an infant in 1876.

Admission is free. For more information, go to www.vahistorical.org.

Those wishing to learn more about wildlife native to North Carolina need only look to the North Carolina Museum of Life and Science located in Durham.

In its indoor exhibit “Carolina Wildlife,” the museum offers visitors the prospect of seeing animals native to the state that are living at the museum because they were injured, rescued or rehabilitated and could no longer survive in the wild.

Some of the top attractions are the barred owl, woodchuck, Virginia opossum, American alligator and 37 species of snakes.

To arrange a visit to the museum, log on to www.ncmls.org.

There are five loggerhead, green and endangered Kemp’s ridley sea turtles on display. Together they represent the most species of sea turtles exhibited together anywhere.

Also housed in the aquarium are fish found in the waters 15 miles off the Virginia coast. They include Atlantic spadefish, a large Goliath grouper, Triple tail, Cobia, Lockdown fish and Permits.

While at the Aquarium and Marine Center, visitors can also visit the Red Sea Habitat and the Norfolk Canyon Aquarium.

For more information, visit the Center’s website at www.virginiaaquarium.com.

The Mint Museum of Art in Charlotte is hosting a special collection featuring the important ceramic regions of North Carolina.

Diversity and Traditions includes ceramics drawn from the Mint’s permanent collection and includes pieces from Seagrove, the Catawba Valley, the Moravian settlement in Forsyth County, the mountains and Penland.

The collection will be on display through December 2011.

The founding fathers of our country still shape our lives today and none may do so more than George Washington, the first President of the United States.

Now the North Carolina Museum of History in Raleigh is hosting an exhibit: Discover the Real George Washington: New Views from Mount Vernon. The exhibit, featuring approximately 100 objects, will be at the museum from September 10 until January 21, 2011.

There are three life-size figures of Washington included in the show at different stages of his life. They depict him as a young surveyor, as Commander in Chief and as the first President.

For more information about the display or the museum, visit www.ncmuseumofhistory.org.