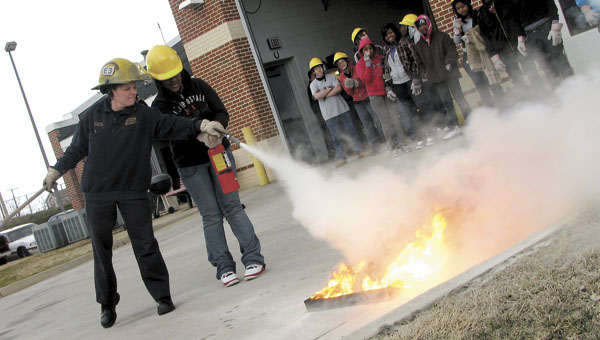 Putting out fires: Local teens learned how to put out fires using a fire extinguisher at the Youth Public Safety Academy. Fire extinguishers are important tools in fighting small fires before they get out of control.

EDITOR’S NOTE: This is the third in a series of stories commemorating National Fire Prevention Week 2010. For more information on fire safety and prevention, visit www.nfpa.org.

Some people like to plan as they go, but a fire will not wait for anyone to get anything in order.

This year’s theme for Fire Prevention Week is “Smoke alarms: A sound you can live with,” but smoke alarms are only one of many household items that can help save lives in case of a fire. Properly placed fire extinguishers and the ability to use one can stop a fire before it gets out of control.

“They’re like an insurance policy,” Suffolk Fire Marshall James Dickens said. “You can never have too many. I have one close to my kitchen, in my garage, in my workshop outside and one toward the rear of the house.”

Dickens stresses that while the extinguisher has its purpose, it’s important to remember that not even the best fire extinguisher is an adequate substitute for a trained fire crew.

“It doesn’t matter how small the fire is, we always recommend you get everyone out of the house and call the fire department,” Dickens said. “If you choose to fight a fire, however, its important for it to be in the proper location, have the right type of extinguisher and know how to use it. I can’t stress enough to call 911 instead of fighting it, though.”

The National Fire Prevention Association recommends the use of a fire extinguisher if the fire is confined to a small area and is not growing; everyone has exited the building; the fire department has been called or is being called; and the room is not filled with smoke.

To operate a fire extinguisher, Dickens reminds people to remember one word: pass.

“Every good thing has an acronym,” Dickens said. “This one is P.A.S.S. ‘P’ stands for ‘Pull the pin.’ ‘A’ is for ‘Aim at the base of the fire — not at the top or the middle.’ And the ‘S’s are for ‘Squeeze the handle’ and ‘Sweep it back and forth’ when you discharge it.”

To be effective, however, the extinguisher needs to be the right kind.

Fire extinguishers can be purchased from any local home supplier or hardware store.

Dickens recommends purchasing a multi-purpose extinguisher — labeled ABC — for use on ordinary combustibles, flammable or combustible liquids and electrical fires.

Dickens also recommends at least a five-pound extinguisher for the home.

Having the right extinguisher and knowing how to use it won’t help when it counts if it isn’t in the right place.

The key to proper placement is not to put them where you expect the fire to be.

“Most likely, if there’s a stove fire and that’s where the extinguisher is, you won’t be able to get to it in time,” Dickens said.

Placing it an accessible distance from the stove would be a wiser decision, he said.

It’s also important not to place it somewhere that could trap you in the home trying to get to it.