On the morning of June 22, 1807, the frigate USS Chesapeake, with 36 mounted guns, left port at Fort Norfolk in Virginia, headed for a peacekeeping mission in the Mediterranean. She barely made it out of the harbor before things went wrong.

The HMS Leopard, a British ship-of-the-line with 50 guns mounted, drew near, and the British commander demanded to be allowed to board and search the American vessel to look for British deserters. When Commodore James Barron refused, the English opened fire, killing three Americans and wounding 18 others. The Chesapeake, which was unprepared for military action as it left port on what was expected to have been an easy mission, fired only one shot in retaliation before Barron offered its surrender. 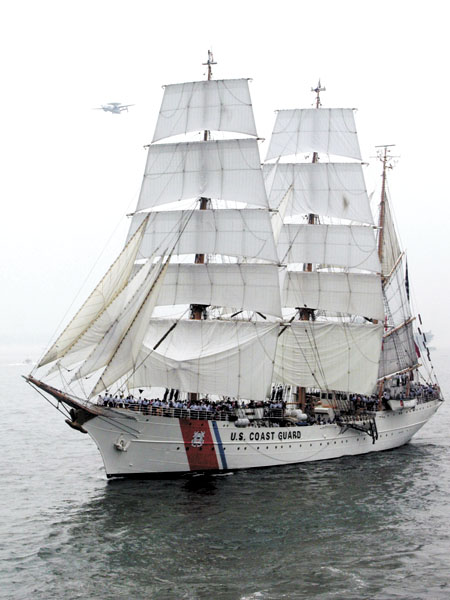 The U.S. Coast Guard Eagle, America’s only active commissioned sailing vessel, is always a favorite during OpSail and Harborfest events in Norfolk, Va. The Eagle is just one of many tall ships and warships expected for the OpSail 2012 event when the celebration comes to Norfolk harbor.

Refusing the surrender, Salisbury Pryce Humphreys boarded the Chesapeake, anyway, found four supposed deserters and hauled them away. The American frigate limped back to port for repairs. Only one of the men taken from the Chesapeake turned out to be British. And the event, which came to be known as the Chesapeake-Leopard Affair, stuck in the craw of the young American republic, which in 1812 finally responded to British harassment with a declaration of war.

The War of 1812, as it is now known, would pit the fledgling American Navy — fewer than 20 ships strong — against a British fleet numbering more than a thousand ships and more than 150,000 men. Aided by privateers, the Americans took more than 1,500 ships during two years of fighting naval battles.

Not much else was settled in the War of 1812, but the American Navy had come into its own.

Two hundred years later, the U.S. Navy still has a heavy presence in Norfolk, Va. And in June 2012, the Navy and the rest of the nation will celebrate the bicentennial of the War of 1812. Norfolk’s harbor will again once come alive with sail as tall ships from around the world make their way to berths near Norfolk’s Town Point Park for OpSail 2012.

“It’s like the Super Bowl for the maritime community,” says Karen Scherberger, executive director of Norfolk Festevents. “There’s a huge degree of competition for these events. It’s not the kind of thing we applied for. We were actually selected. We were invited.”

Norfolk is one of five American port cities that will take part in the OpSail event. It will start in April 2012 in New Orleans and then head to New York in May, Norfolk on June 7-12 and Baltimore the following week. The event closes in Boston for the July 4 celebration.

Operation Sail, or OpSail, was first envisioned as a way to bring the world’s remaining tall ships together for the New York World’s Fair in 1964. During the nearly five decades since then, OpSail has continued the tradition to mark historic events. OpSail ’76 celebrated the Bicentennial, OpSail 1986 marked the 100th anniversary of the Statue of Liberty, OpSail ’92 celebrated the 500th anniversary of Columbus’ discovery of America, and OpSail 2000 helped welcome the new millennium. OpSail 2012 will mark the bicentennial of the War of 1812 and the birth of the Star Spangled Banner.

This year’s event, Scherberger said, should be bigger than ever because of the naval connections. Tall ships and, for the first time, active naval warships, from 30 or more nations are expected to be berthed at the ports in the five host cities.

Taking advantage of the connection to naval history, the OpSail organization asked Admiral Gary Roughead, chief of naval operations for the U.S. Navy, to make the invitations for other countries to send their ships and participate in the event.

“The invitation has come from CNO to CNO,” Scherberger said. “The fact that it’s navy to navy perhaps carries a little more weight.”

Organizers are still at an early point in the planning process, but Scherberger expects the Norfolk event to be a huge draw for tourists and a major economic force for the region.

“I know for a fact that people have already started making reservations,” she said, adding that some organizations are planning annual conferences around OpSail so that attendees will be in town for the event.

Festevents estimates that OpSail 2000 brought in $58 million in direct economic impacts to the Hampton Roads region of Virginia. Each ship that visits, she added, spends about $100,000 while in port.

Visitors to the event can do it on a variety of budgets. Since both entry to the event and tours of the tall ships will be free, a family could visit for a day with minimal investment.

Others will pull out all the stops, cruising to the Norfolk harbor in yachts to watch the spectacular Parade of Sail from the water, docking in Norfolk or Portsmouth and spending the night in one of the area’s hotels. The Coast Guard estimates that boats carrying more than 32,000 people were on the water for the OpSail 2000 event.

But the stars of the show, as always, will be the tall ships, the towering wooden masts, the broad, billowing sails and the smartly dressed sailors.

For a week, Norfolk’s harbor will look a lot like it must have in 1807. This time, though, the British and the Americans will be allies. And this time, the cannon will not be loaded.

By Lauren Wicks There is no way around it – everyone grows older. With age come great experience, memories and... read more