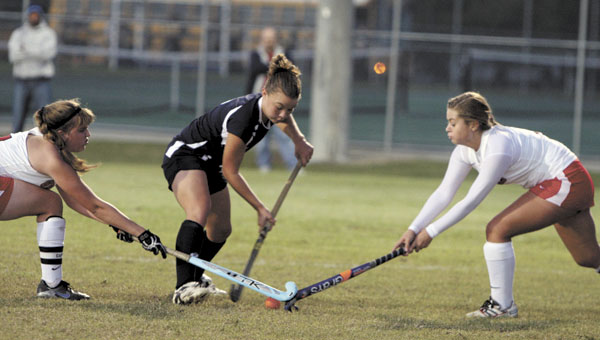 Five goals: Lakeland senior Kendell Combs scored five goals Wednesday to lead the Lady Cavaliers to an 8-0 win over district opponent Grassfield. Lakeland moves to 11-0 overall and 6-0 in the Southeastern.

CHESAPEAKE—With a two-week break in the middle of the regular season, Lakeland’s field hockey team picked up right where it left off to go to 11-0 on the season with an 8-0 mercy-rule win at Grassfield Wednesday night.

Playing under the lights, the Lady Cavaliers took the lead 10 minutes in with Taylor Young’s goal and needed only 30 more minutes to tally all their goals. Senior forward Kendell Combs, a Virginia Commonwealth University signee, had a hat trick in the first half and finished with five goals.

“We’ve had a lot of time off, so today it was sort of like starting over again,” Lakeland head coach Tara Worley said.

Kelsey Smither’s hard drive on goal created a rebound, and Young pushed the ball by the Grassfield keeper to put Lakeland ahead.

Three minutes later, Alexis Albright was in the perfect spot to deflect Jennifer Hedrick’s blast on goal by the keeper and into the cage.

Combs turned it into a full rout with three goals in a nine-minute span. Combs ripped a shot in off a pass from the corner spot by Summer Parker.

Her second came from a great give-and-go. Parker started the set play from a Lakeland corner, sending a short pass to Combs on the wing. Combs passed to Smither near the top of the circle, Smither passed back to Combs as she moved in on goal and was ready for a quick shot. It was Smither to Combs again to make it 5-0 Lakeland in the 25th minute.

Combs assisted Jillian Bates for a goal seconds into the second half. The Lady Cavs attacked straight from the whistle to start the half. Combs passed to Bates near the penalty spot. Bates collected the pass and turned to send a shot on goal in one quick move for the goal.

Combs scored off of assists by Young and Smither, with it being Smither’s fourth helper of the night, to make it 8-0.

“Before the long break, we were just starting to peak again. We were starting to really do good things as a team and play well together,” Worley said.