Police and animal control officers are looking for a 28-year-old Suffolk man accused of setting his brother’s dog on fire during an argument. 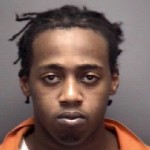 Lashawn M. Harper, who lives in the 400 block of Webb Street, is wanted on one count of animal cruelty and one count of malicious wounding of an animal, according to Suffolk spokesperson Debbie George. Harper is described as a black male, about 5’10” tall and 160 pounds.

According to George, Suffolk police, animal control and fire investigators were called to the 400 block of Webb Street Wednesday morning in reference to an injured animal. The owner of a 1-year-old pit bull told investigators that during an argument his brother, Harper, had thrown gasoline on his dog and then lit the dog on fire.

The pit bull rolled in the grass to extinguish the fire, George said in a press release. He suffered head, neck and chest burns, but his injuries did not appear to be life threatening.

Anyone who knows Harper’s whereabouts is asked to contact Crime Line at 1-888-Lock-U-Up. When calling Crime Line, callers do not have to give their names or appear in court. If the information leads to an arrest, the caller could qualify for a reward of up to $1,000.