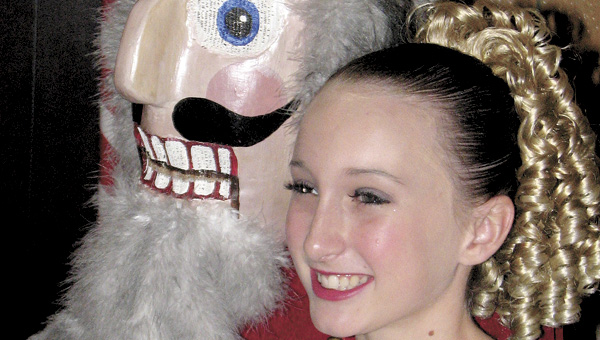 Clara and the Nutcracker from last year's "The Nutcracker" greet fans at the Sugar Plum Tea, which returns this year to the Suffolk Center for Cultural Arts.

Old favorites and a new focus on community theater are filling up the schedule at the Suffolk Center for Cultural Arts this year.

Shows that are quickly becoming traditions at the center — including historian Clay Jenkinson, musical group Thunder Creek and Ballet Virginia’s “The Nutcracker” — all are on the schedule.

However, the season also includes a variety of new acts, as well as plenty of community involvement.

“What we’re all about is trying to be a place the community can come participate,” said executive director Paul Lasakow. “We’ve got a large emphasis on community-based products.”

Kicking off the season will be “Steel Magnolias” Oct. 15, 17, 23 and 24. The play will feature community actresses and a local director, Steve Earl, who is the head of the theater department at the Governor’s School for the Arts.

“I’ve got an enormous amount of respect for his work,” Lasakow said. “I just think it’s something everybody’s going to see a little bit of themselves in.”

Also fitting in with the community theme, gospel choirs from 10 local churches will be featured as part of the second Suffolk Gospel Celebration on Nov. 7. The show’s lineup will feature different churches than those that performed last year, Lasakow said, in order to include as many people as possible.

Community actors, in partnership with Total Arts Theatre, also will present “Christmas with the Joneses” in a gospel musical Dec. 11-12.

“It’s a heartwarming story that challenges folks to look at their lives and become a little bit better, but keep them laughing all the way,” Lasakow said.

Additionally, the Suffolk Players Community Theater will put on “Joseph and the Amazing Technicolor Dreamcoat,” a musical adaptation of the Biblical story of Joseph, his brothers, his dreams and the multi-colored coat. The show will happen March 5-6 and March 12-13.

The final community act on May 7-8 will be “Right Woman, Wrong Man,” the musical story of a woman who takes up with a man named Lucky — and meets with the opposition of her mother and three girlfriends.

Besides the community acts, a number of regional and national acts will be staged at the center. The holiday season will see the return of “The Nutcracker” and perennial favorite Sugar Plum Tea on Dec. 4-5.

The tea offers the opportunity for children to dine on sweets and meet the dancers they will see on stage later, including Clara, the Nutcracker Prince, the Sugarplum Fairy, the Rat King and others from the Land of Enchantment.

Historical figures also are returning to the Suffolk Center, including Alexander Hamilton (by Bill Chrystal) on Nov. 20 and Meriwether Lewis (by Clay Jenkinson) on Jan. 28.

In addition to the shows mentioned above, the remainder of the schedule appears below. For more information or to purchase tickets, visit www.suffolkcenter.org.

Feb. 12 — An Evening of Opera and Broadway

May 9 — Ralph Stanley and The Clinch Mountain Boys

Fun in the sun

By Gwen Albers Any kind of beach you need. It’s all here. Virginia is for Lovers, especially for those who... read more