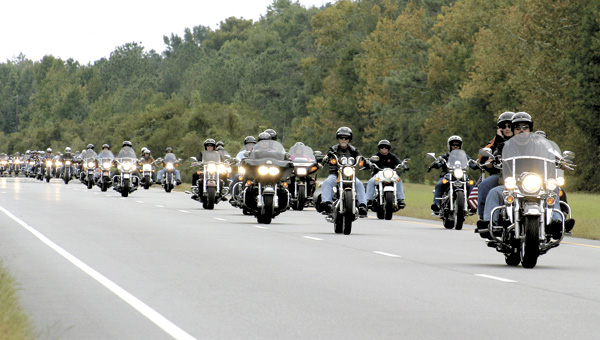 Roaring through: The ninth annual Swamp Roar will take place at 10:30 a.m. on Sunday with a send off at the Peanut Festival. Each year, the event draws hundreds of motorcyclists and all proceeds for the event, only $20 per participant, benefit the Great Dismal Swamp.

Skies should be clear on Sunday, but a thunderous sound will make the ground shake in the Great Dismal Swamp.

Hundreds of motorcyclists are expected to participate in the ninth annual Swamp Roar. Cyclists will be unleashed at 10:30 a.m.

“From a distance, when you hear the engines start up, it’s like the deep roll of thunder,” said Lynette White, Suffolk tourism development manager. “That’s why we call it a ‘roar.’ It’s always an impressive sight to see.”

The cyclists travel an 80-mile loop beginning at the Suffolk Executive Airport and following Route 58 around the north side of the swamp, down Route 17 on its eastern edge into North Carolina, taking Route 158 along its southern border and going north on Route 32 until reaching the Peanut Festival site again.

“It’s a beautiful time of year for the ride,” White said. “Cotton is being harvested, peanuts are being dug up, there’s a little bit of tree color and the air is brisk.”

Once back at the festival site, there will be a concert by Tracy Lawrence and a reception with plenty of good eats.

The reception, concert, ride and an event shirt are all included with a $20 per person donation that benefits nature-based tourism, interpretive and educational programs and habitat restoration in the Great Dismal Swamp.

“Throughout the years, we have raised quite a bit of funding for new projects, roadways, signage, exhibits and programs at the Great Dismal Swamp,” White said. “Money from the rally was seed money for its partnership with the U.S. Fish and Wildlife Service, which brings the birding festival to the swamp. It has really developed into so much.”

The roar began in 2002 as the brainchild of White, a self-described motorcycle enthusiast.

“It started as a little fundraising event for the Great Dismal Swamp and an event for motorcyclists because back then we didn’t have many rides,” White said.

Expecting between 50 and 80 motorcyclists to participate, organizers were overwhelmed when it attracted more than 500 bikers.

“The next year we teamed up with the Peanut Festival,” White said. “It has been a great cooperation ever since.”

The rally has swelled to 1,000 participants in the past. About 800 are expected this year.

Registration the day of the event begins at 9 a.m. Call the Suffolk Visitor Center for more information at 514-4130.