Questions for the candidates 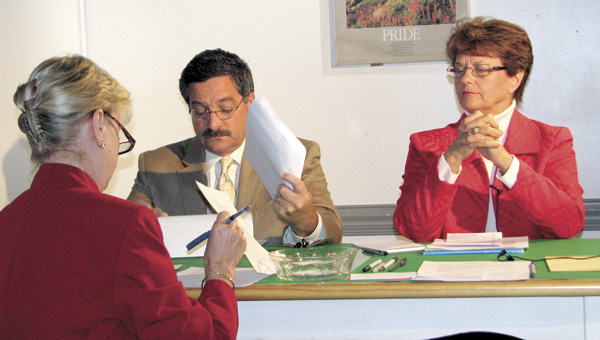 Candidates: Chuckatuck borough City Council candidates Caroline Martin, right, and Mike Duman prepare to face a set of questions about their views on Andy Damiani’s “Roundtable Talk.” On the left is Jackie Cherry, who kept time for the candidates.

Suffolk City Council candidates answered questions about their views on smart growth, special interests, cooperation with the School Board and other subjects on Wednesday.

Candidates spoke about the need to build a consensus with the School Board, listen to citizens’ concerns, operate more efficiently and fix transportation woes.

Former mayor Andy Damiani posed the queries during a taping of his show “Roundtable Talk.” The show will begin running Oct. 15 and continue each day until the election at 8 a.m., 4 p.m. and 8 p.m. on Charter channel 13.

Seven candidates for four seats sat across from Damiani and talked about the issues. Charles Brown, the incumbent in the Cypress borough, did not attend the taping.

Each candidate drew two questions from a bowl containing 10 options. Each received a minute to respond to the questions drawn, and the candidate’s opponent received a 15-second rebuttal period.

The Suffolk News-Herald put forward two of the questions. In addition, two were submitted by the Virginian-Pilot, and two were suggested by the Hampton Roads Chamber of Commerce. Damiani supplied the other four questions.

The most frequently drawn question — chosen in three out of the four boroughs — asked the candidates to identify influential special interest groups in the city and lay out a plan for ensuring their voices did not drown out those of ordinary residents.

“I don’t know of any special interest group,” Holy Neck incumbent Jeffrey Gardy said. “What we listen to are the taxpayers and the citizens.”

“Perception is everything,” Varney countered, adding that many citizens believe the real estate and development industries have some control in the city.

Chuckatuck candidates responded to a question about the city’s cooperation with the School Board.

“There appears to be a breakdown in communication,” Mike Duman said. If elected, he would push for at least two joint meetings per year between the City Council and School Board, he said.

His opponent, Caroline Martin, pointed to her business and community experience as evidence she can help bring about cooperation between the two bodies.

“I’ve been a consensus-builder,” she said. “That’s what we need here.”

Suffolk borough candidates responded to a query on what city government must learn to do better to properly serve the citizens.

“I think that we need to give the city government back to the people and allow their voices to be heard,” challenger Alvin Copeland said.

Incumbent Charles Parr said the answer is to “look at being more efficient with the taxpayers’ dollars.”

The lone candidate in attendance for the Cypress borough, Bill Newsome, received a question about City Council’s role in helping citizens overcome divisions that still exist after the merger.

“I think it’s important the City Council try to unite the city,” he said. “We merged to make everything better for all parties involved. What is good for one borough will eventually be good for the entire city of Suffolk.”

Candidates also answered questions about why they hope to serve, what they view as the most serious problem Suffolk faces, what they like or dislike about Suffolk, what the city should do to retain its technological base, and whether City Council should have a voice in where a new school is built.

One question on the list, regarding balancing the rights of existing residents with the location of new developments, managed to escape being asked of any candidate.