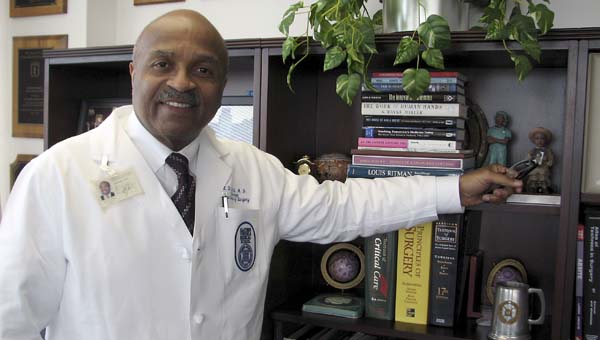 Dr. L.D. Britt, a Suffolk native, spends little time in his office at Hofheimer Hall at Eastern Virginia Medical School. Instead, he spends most of his time seeing patients, performing surgeries and traveling to conferences throughout the world.

Dr. Lunzy Delano “L.D.” Britt sits in his sixth-floor office at Eastern Virginia Medical School in Norfolk and ticks off his appointments on his fingers.

He has meetings with eight patients Monday. On Wednesday, he has five surgeries scheduled, including a thyroid operation and hernia repair.

Britt, a Suffolk native, has been seeing patients and performing surgeries for years. However, 2010 has brought a heap of new honors, awards and administrative positions to add to his already lengthy list.

Last week, Britt was installed as president of the American College of Surgeons, a professional organization of surgeons that aims to improve care and safeguard standards. At the organization’s Clinical Congress, the U.S. Surgeon General, Vice Admiral Regina M. Benjamin, surprised Britt by arriving at the conference and awarding him the Surgeon General’s Medallion.

“That was a surprise,” Britt said this week.

He also recently was named to the presidency of the American Association for the Surgery of Trauma, a professional organization of trauma surgeons. Soon, he will travel to the Royal College of Surgeons in England to be named an honorary fellow there.

Despite all the awards, though, Britt remains humble and never forgets his roots.

“I’m a proud native of Suffolk,” he said. “My first slide [during speeches] is always the railroad tracks in Suffolk. I will not give a talk and not have that as the first slide.”

Britt graduated in 1968 as the valedictorian of Booker T. Washington High School, where he had been the captain of the football and track and field teams. As a child, he already was interested in the medical field, because he perceived the shortage of doctors during appointments with family, he said.

“We would have to wait hours, sometimes eight or 10 hours,” he said. “I knew I had an attraction to medicine.”

A football injury and resulting visit with a surgeon inspired him to specialize in surgery. He received his medical training throughout the country but returned to care for his parents during their last years and once again put down roots in the area.

Britt’s typical day begins between 3 and 4 a.m., when he rises in his Suffolk home to exercise before going to work. He then makes rounds and sees patients. Often, he has surgeries scheduled.

He also teaches at Eastern Virginia Medical School, in addition to performing his administrative duties, conducting research, updating his textbook, and still finding time to spend with his wife and daughter. In his free time, when he gets it, he enjoys playing chess and reading autobiographies.

Despite all the honors and awards, Britt says he doesn’t do the work “for the glory.”

“This is a humbling profession,” he said. “You don’t concentrate on the glory part. If I could have good outcomes with patients, I’m happy.”

Despite his excellent training and best efforts, however, not all patients emerge from the operating room better than they went in.

“You always reflect on the cases where you had a bad outcome, even if you did everything you could possibly do,” he said.

As a Christian, Britt says his faith gives him the emotional and spiritual stamina to make it in the operating room — as well as the strength to persevere when things don’t go his way.

“You just have to believe that you’ll do the right thing, and at the end of the day there are things you don’t know,” he said. “You see somebody’s life totally changed because of an accident, and you know that could have been you. You realize how fast things can happen.”

Britt continues to work hard and has no plans to give up on his profession any time soon.

“You’ll find a billionaire in any hospital in America would give every dime they worked hard for to get their health back,” Britt said. “They would do it in a nanosecond. That is a spiritual experience, knowing that.”

Alzheimer’s: Affecting more than the elderly

Caroline Grube knew what Alzheimer’s looked like. She had seen it in her father’s eyes and watched as it finally... read more