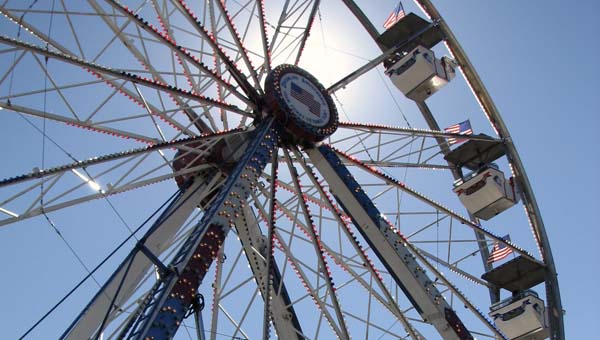 The Ferris wheel offered a great view of the grounds during the 33rd annual Suffolk Peanut Festival this weekend. Thousands of people turned out to take part in the various activities and enjoy a variety of entertainment and food options.

The stage has been struck, tractors and cars have been hauled away from the arena, vendors have closed down and carried their wares back home or to the next location on their tours, and the 2010 Peanut Festival has been entered into the books.

With everything over but the accounting, Peanut Fest officials could not be happier with the way things turned out for their 33rd annual event celebrating the legume that helped put Suffolk on the map.

“It could not have been more perfect,” said Linda Stevens, director of Suffolk Festivals, Inc., the nonprofit organization charged with organizing and running the festival each year.

“We had perfect weather and great crowds. I’ve been here for 21 years, and this is the most perfect one yet.”

Because attendees pay for entry by the vehicle, rather than by the head, there is no official headcount for any Peanut Festival, Stevens said. And a count of the vehicles that were admitted will not be complete for at least a week, so even estimates based on vehicle counts are not yet available, she said.

But anecdotal evidence suggests that the Peanut Festival was a great success this year.

Crowds were good — and “in some cases, better than we had hoped” — at the various events held throughout the festival, Stevens said. And a new feature — the Peanut Lounge, which offered a covered place to sit and relax for a bit in the midst of the area with the vendors’ tents — always seemed to be nearly full, she said.

A week later, however, skies were blue and temperatures were perfect for a fall festival, even a little higher than had been forecast. Revelers probably still noticed some damp areas, but a change some time back in how the carnival part of the festival was set up helped alleviate the muddiness, she said.

“The new carnival setup is awesome,” she said. “It’s very visual and functional and out of the mud. The site guys did a great job.”

With the 2010 event complete, Peanut Festival volunteers and staff members “will take a month, six weeks to get all the bills paid and the thank-you notes sent,” and then they will take a brief break around Christmas.

But planning already is under way for next year’s festival, Stevens said, and sponsorships already are being sought.

“That goes on all year long,” she said.

An 80-percent-size replica of the Vietnam Wall will be among the monuments on display at Bennett’s Creek Park starting Thursday... read more