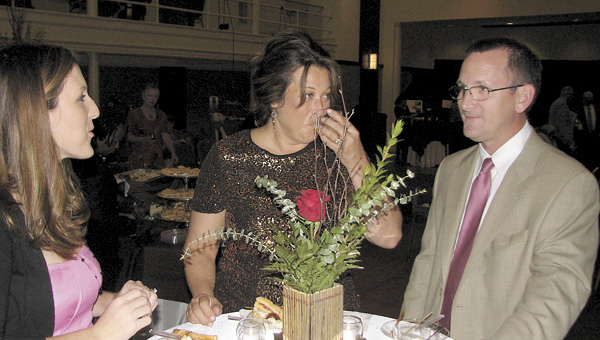 From left, Ericka McKellar, Sonja Reuter and Rick Reuter chat and enjoy hors d’oeuvres at last year’s Genieve Shelter benefit. The Genieve Shelter is a shelter and resource for victims of domestic violence in Western Tidewater.

In the 14 years Val Livingston has been working at the Genieve Shelter, she has seen the need for shelter from domestic violence rise dramatically.

Until recently, the record for households the organization provided emergency shelter to in one fiscal quarter was 13. This quarter, from July to September, that number leapt to 21 households.

“Domestic violence is not someone else’s problem, it is a societal problem,” Livingston said. “People do die and the children who grow up in violent homes become violent as teens and adults. They go into schools and bully your children. They grow up and marry your children and beat them. When they have kids, they beat your grandchildren. Domestic violence perpetuates violence in the entire community.”

To help raise awareness of domestic violence, as well as funds for its fight against the growing problem, the Genieve Shelter is holding several events in coming weeks to commemorate Domestic Violence Awareness Month.

On Thursday, it will have a candlelight vigil at 6 p.m. at Shooting Star Gallery to commemorate victims, survivors and children of domestic violence.

The vigil this year will include the telling of “Amy’s story,” the story of a woman killed by her husband while her family was waiting outside as she packed her bags.

After the story, there will be a discussion time and the evening will end with the lighting of candles to honor those affected by domestic violence.

On Oct. 23, the shelter will partner with the Little Zion Baptist Church to host a “Walk for Hope” at the Windsor Castle Park in Smithfield. Shirts, $10, will be available for purchase. All proceeds from the event will benefit the shelter, but Livingston emphasized the importance of community awareness.

“We want people to know what the problem is and what they can do about it,” Livingston said. “Some victims don’t realize they’re victims. They think slapping and hitting isn’t a big deal, but leads to other things. It doesn’t mean it won’t escalate, and you can’t wait until it gets more serious. That’s not a risk you can take.”

Even as the number of requests for its services rise, the amount of funding the Genieve Shelter gets has fallen because of the poor economy. The shelter has sustained tens of thousands of dollars of decreased funding and was forced to make severe cuts to its staff.

To help raise funds for the shelter, it will host its 2010 masquerade gala, “Unmasking Domestic Violence,” on Oct. 29.

“In my 13 years here, I’ve never seen it this bad,” Livingston said at the beginning of the fiscal year. “It’s always been a few thousand here, a few thousand there, but just last week we lost $9,000 in grant money that we received last year and were depending on for this year and won’t get. It’s just getting worse. We’re starting off this fiscal year in worse shape than last year. We’re stepping up our fundraising efforts, but there are only so many dollars.”

In its 2010 fiscal year, the Genieve Shelter provided emergency shelter to 138 people.

A mere one month and two weeks into its next fiscal year, 50 people have been provided with emergency shelter.

“More people are needing our services, and we’re doing our best to meet that need with fewer dollars and fewer staff,” Livingston said.

To make a donation or find out more about upcoming events, visit http://home.earthlink.net/~genieve88/ or call 925-4365.

Candidates for Chuckatuck seats on City Council and School Board took their campaigns to the Crittenden, Eclipse and Hobson Ruritan... read more