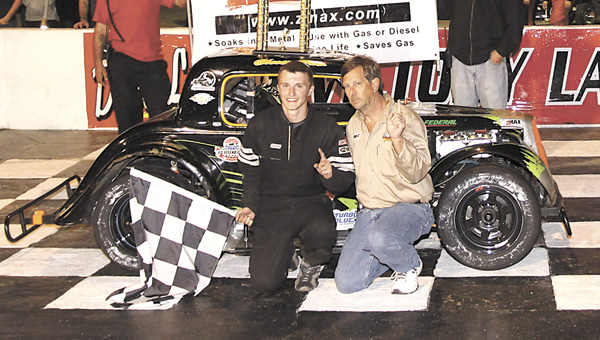 Victory Lane: Michigan’s Chance Rice, driver of the No. 36 in the INEX Legends Nationals, celebrates in Langley Speedway’s Victory Lane Saturday after winning the Pro Division A-Main race. Rice pulled off a rare doubleheader for a Legends National event, winning the B-Main race to qualify for the A-Main and then getting the checkers there, too. Approximately 125 cars were at Langley Thursday through Saturday for the 19th Annual Asphalt Nationals for the Legends Series.

Rice, from Michigan, raced his way into the 30-car field by winning the B-Main earlier in the day. Daniel Hemric was the pole-sitter for the event.

The race got off to a raucous beginning as 14th-place starter Evan Swilling barrel-rolled into the Turn 1 wall on the opening lap. The event was immediately halted as emergency personnel rushed to the scene.

On the second try at a start, Kyle Beattie took the early lead. On lap 14, one lap after a restart, Hemric took the lead from Beattie.

A three-car crash brought out a second red flag on lap 47. With the laps winding down, Doug Stevens moved up to pressure Hemric on the restart. His bid seemed to pay off as the leader slipped wide in Turn 3, opening the inside lane.

At the end of the backstretch, on lap 48, Hemric and Stevens locked horns and slid into the outside wall. Beattie, in third, was also involved in the fracas. Rice took over the lead.

On the last restart, Rice forged a one-length edge over Steven Cantrell and maintained that gap to the finish, winning by 85-thousandths of a second.

Back in April, following a scuffle with Jake Morris in a national qualifying event, 12-year-old Gray Gaulding tickled the Langley crowd with his succinct take on the battle — “A man’s gotta do what a man’s gotta do.”

Gaulding got to trot out that signature line again as he muscled past Sean Shalvoy on the white-flag circuit to win the 50-lap Young Lions A-Main.

Sean Rayhall was the pole-sitter for the race, starting to the inside of Shalvoy on Row 1. Josh Morris and Gaulding made up Row 2.

By lap 27, Shalvoy had manufactured a five-length advantage over Gaulding. Caution flags on laps 31 and 35 bunched the field, however.

On a “green-white-checkered” finish, Shalvoy bolted to a three-length lead on the restart. Gaulding closed the gap and the two were glued together at the white flag.

Gaulding battled underneath Shalvoy in Turn 2, drew even on the backstretch and completed the pass for the win through Turns 3 and 4.