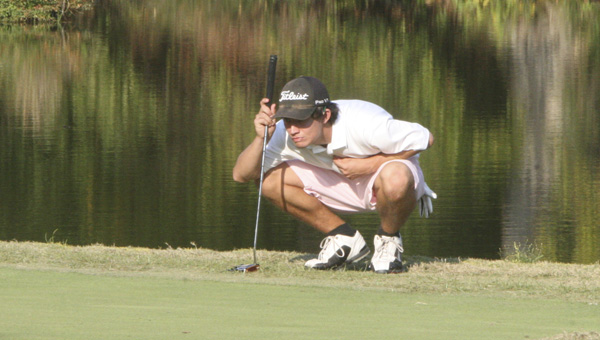 BIrdie putt: Nansemond River junior Travis Johnson reads his birdie putt on No. 17 Tuesday in the final round of the VHSL State Championship at Nansemond River Golf Club. Johnson shot rounds of 74 and 70 to finish even par and 10th in the state. Kellam won the team title and Kellam’s Alex Lloyd was the state medalist with two 67s for a 10-under-par total.

For the second time in a week, Nansemond River’s Travis Johnson saved his best golf for the last day of a big tournament.

Last week in the Eastern Region Tournament at Nansemond River Golf Club, Johnson kept his season going by shooting an even-par 72 in the second round.

Tuesday in the second round of the VHSL (Virginia High School League) Group AAA State Tournament, also at Nansemond River Golf Club, Johnson shaved four shots off his Monday score with a 2-under-par 70 to finish 10th in the state.

“I’ve been playing pretty well. It’s just been about making the putts I need to make, which I did today,” Johnson said.

The Warrior junior carded three birdies and was steady the whole way around the 6,750-yard course, with his only bogey coming on No. 11, a long par three.

As he did in the last round of regions and Monday’s first round, Johnson made up ground versus par on Nansemond River’s front nine.

He birdied the opening hole, a par four.

“I hit it to about 10 feet to the pin, then I just let the putt fall into the hole because it was downhill,” he said.

Johnson birdied No. 6, another par four, with a long-range putt.

“I was just trying to get it close and it fell in. It was about 30 or 40 feet, downhill, with a big break,” Johnson said.

After his lone bogey, Johnson birdied the par-four No. 12 to get back to 2-under-par. He stayed right there with six straight pars to finish his round.

He needed good pitch shots and making putts from about six feet for pars on Nos. 14 and 15 and came up inches shy of a birdie after a good approach to the island green on No. 17.

With his senior golf season to go, Johnson’s already achieved one big goal he set for himself when starting with the Warrior golf team as a freshman.

“Since I walked into River I saw the “Warrior Wall” with everyone’s picture who’s made it to states. I had the goal of getting on there. Hopefully I can help get baseball there, too,” Johnson said. He’s a first baseman/pitcher for the Warriors in the spring.

Kellam set a new Group AAA State Tournament record with a team score of 577 (+1) and beat runner-up Deep Run by eight strokes. Chantilly, Langley and Loudoun Valley all broke 600 as well. Any of those team scores would’ve won the state tournament in 2009 or 2008.