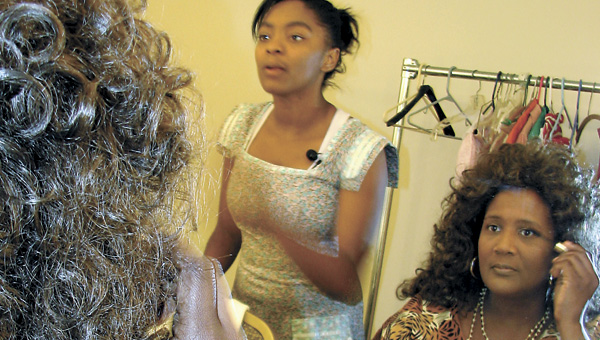 Magnolias: Coryn LaVeist, left, who plays Annelle in the Suffolk Center for Cultural Arts’ production of “Steel Magnolias,” and Gia Sams, who plays Truvy, prepare their makeup for a rehearsal of the play on Wednesday evening. The show opens Friday.

Betty Ann Campbell doesn’t let her age slow her down.

The 88-year-old does water aerobics at the YMCA three times a week, directs the Golden Voices choir at the Lake Prince Woods retirement facility, and hosts a sing-along for the residents there each month.

This weekend and next weekend, however, the entire Suffolk community will get the chance to see her in action. She’s performing the part of Clairee in the Suffolk Center for Cultural Arts’ production of “Steel Magnolias.”

“I’ve done a lot of community theater,” Campbell said. “I usually tell people to look at the gray hair and they’ll know how much I’ve done.”

“A lot” might be an understatement. Campbell has produced, acted, taught and directed shows ranging from skits at the retirement facility to performances in Norfolk and beyond. She also does Biblical skits for her friends at Lake Prince.

“I was delighted when I had the opportunity to do Clairee,” said Campbell, who has had lead roles in “The Foreigner” and “On Golden Pond” in the past.

“I thought, ‘OK, why not?’” Campbell said about auditioning for the play. “I think it was just the desire to still be involved and to think that I could do it.”

Campbell’s favorite scene in the play is the final one, where Clairee gets into a physical battle with another character. It’s another way acting helps her stay healthy, Campbell said.

In the midst of her acting, Campbell encourages others she comes in contact with to remain active, as well.

“I find that I’m challenging the older adults all the time not to just be very noncommittal about everything,” she said. “There’s still lots of life to live, and I’m so lucky physically and all. I certainly want to use it the best way that I can.”

To get tickets for any of the “Steel Magnolias” performances, visit www.suffolkcenter.org or call 923-2900.