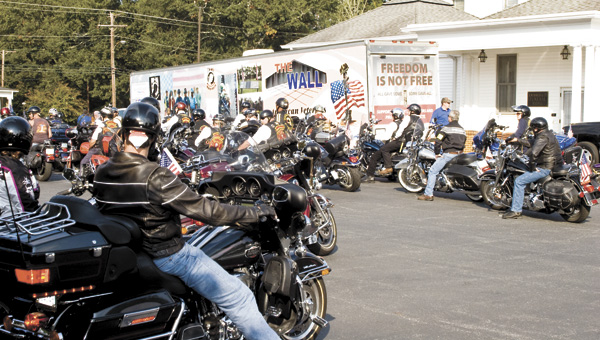 Motorcycle escort: Dozens of motorcyclists prepare Wednesday to escort the American Veterans Traveling Tribute from R.W. Baker & Co. Funeral Home and Crematory downtown to Bennett’s Creek Park, which will be its home through Sunday evening.

Accompanied by the “rolling thunder” of 50 motorcycles, the American Veterans Traveling Tribute rolled through town yesterday, headed for a four-day engagement at Bennett’s Creek Park.

The “Cost of Freedom” exhibit opens today at 1 p.m. with a special ceremony that will include the posting of colors, a wreath-laying ceremony and a Marine Corps Reserve band.

Special events are planned throughout the weekend, but visitors are encouraged to attend at any time during the time the exhibit is open. Today’s hours are 1 to 6 p.m. The exhibit is open Friday through Sunday from 9 a.m. to 6 p.m.

The mobile display honors those throughout history who have sacrificed for America. The centerpiece is an 80-percent replica of the Vietnam Veterans Memorial Wall in Washington, D.C., but the exhibit also includes memorials to World War II, the Korean War, the Sept. 11, 2001, terrorist attacks, the Fort Hood shooting, police and firefighters, prisoners of war and those who remain missing in action.

R.W. Baker & Co. Funeral Home and Crematory, with the help of numerous sponsors, is bringing the exhibit to Suffolk to mark its 125th anniversary.

A fifth-generation family-owned business and the oldest establishment in Suffolk, R.W. Baker & Co. has witnessed more than a century of changes in the community and the nation.

“But our freedom remains steady and true, a testament to the American spirit and the valor of every service man and woman,” Robert N. “Blake” Baker, vice president of the funeral home. “We didn’t want to miss this momentous opportunity to honor all they’ve given to us.”

Organizers are expecting as many as 50,000 people to attend the event, which has been heavily publicized in newspapers, on television and on the radio.

The wall includes the names of more than 58,000 American service members who never arrived home alive from Vietnam. Of those, 1,304 were native Virginians and 344 came from Hampton Roads, according to Baker.

Admission to the park and the exhibit will be free.

A schedule of events follows: