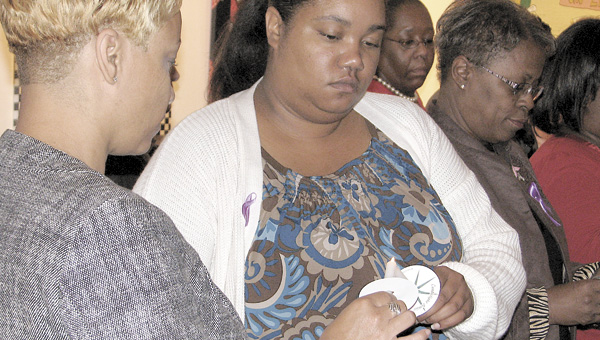 Silence was the key word at a candlelight vigil for victims of domestic violence Thursday.

It was only encouraged, however, during a moment of silence to remember victims. During the rest of the program — including after the viewing of a documentary of an actual domestic violence case that ended in tragedy — attendees were encouraged to speak up.

“Domestic violence should not be taboo,” said Melissa Hedelius, a children’s advocate for the Genieve Shelter, a domestic violence shelter that hosted the vigil at the Shooting Star Gallery. “You should sit down and talk about it.”

The centerpiece of the program was the screening of “Amy’s Story,” a documentary of the violent relationship of Amy Homan McGee and Vincent McGee. Vincent McGee shot and killed his wife in November 2001 at their home in State College, Pa., as she tried to gather baby clothes and bottles in order to leave him after years of abuse.

The documentary highlighted many hallmarks of domestic abuse — obsessive control, a fearful victim, friends and family who tried to help, the victim’s many attempts to leave and, worst of all, the children who were close by when the abuse happened.

At the end of the documentary, about 30 audience members were silent for a few moments as Hedelius tried to jump-start a question-and-answer session.

“Was anybody surprised at the outcome?” Hedelius asked.

No head nods or words came from the audience.

“Was anybody not surprised?”

But then, several audience members spoke up with their reactions, moving from incomplete thoughts to overarching assessments of a broken system.

“The gunshot in the truck.”

“I believe she was really scared of him.”

“They tend to believe things will get better.”

“It seemed like the system let her down several times.”

Hedelius kept the conversation moving with her observations from years of working with domestic violence victims.

“Children are another reason why they stay.”

“Statistically, it can take seven or more times to leave.”

One participant asked what interventions are in place to support domestic violence victims.

“If there was one key thing that was working, we wouldn’t even be there tonight,” Hedelius said.

Several audience members gave their opinions on how family, friends and coworkers can help victims.

“Each person is responsible for helping someone else.”

“It’s important not to be judgmental.”

Added Hedelius: “Listening can be the best thing anyone can give.”

“Every time you call for service, it is logged,” he said. “You’re not just calling us to ease a situation. You’re creating a record.”

For more information about the Genieve Shelter and domestic violence, visit home.earthlink.net/~genieve88.

In addition to local races in four of Suffolk’s seven boroughs, all voters in the city will find two candidates... read more