One goal works for Lady Saints 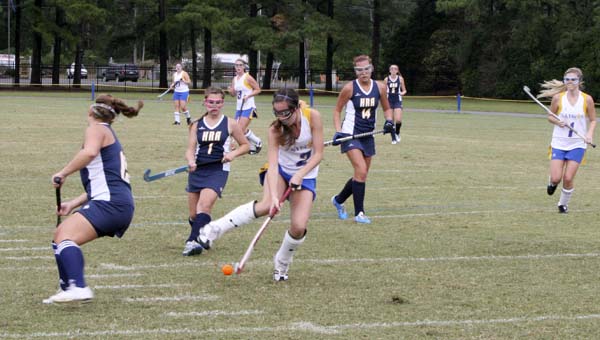 Nansemond-Suffolk junior Liza Bart Dolan scored with 15 minutes left in Thursday’s match to give the Lady Saints a 1-0 win over Hampton Roads Academy. The Lady Saints (5-8) allowed only one shot on goal to the visitors.

The Lady Saints controlled the match practically the whole way. NSA outshot the visitors 17-1 and earned nine penalty corners to HRA’s one.

The main thing missing, said NSA head coach Ashley Aston, was another goal or two along the way to make everything a bit easier.

“For the most part, the girls played awesome. The score really didn’t show how well we played. We were unlucky a couple times not to score, but the offense and defense did a great job supporting each other and our subs came in and did a great job,” Aston said.

The win was the first in five matches for the Lady Saints (5-8), but even one of last week’s losses was a sign of the direction Aston has NSA moving in during her first year as coach.

“Honestly, I think the best game we played all year was against Cape Henry,” Aston said.

Last Thursday, NSA dropped a 2-1 result to the Lady Dolphins in Suffolk. Back in the first week of the season, Cape Henry routed NSA 7-1 in Virginia Beach.

The Lady Saints could’ve had two or three tallies by halftime against HRA.

Dolan and Kelsey White fired good shots on goal a few seconds apart on a corner play about eight minutes into the match. Outstanding saves by the Lady Navigator keeper kept NSA off the board.

In the final minute of the half, Dolan raced on the dribble into the HRA arc and put a shot on goal. Alexis Clary followed up the rebound and got another shot away, but again they were just close calls.

NSA couldn’t convert on five corners in the first half and a couple more in the second half until the Lady Saints capitalized with a well-run play for the go-ahead goal.

Emily Lewinski put the ball in play and NSA moved the ball quickly around the top of the arc, from Brooke Starling to White to Dolan. Dolan let a sharp shot go from a couple steps inside the arc for the goal.

Three minutes later, after rushing forward with the ball to about 10 yards from the HRA goal, Dolan was tripped down and injured. She had to be helped from the field and didn’t return to play.

Hampton Roads put together one dangerous burst of play right in front of the NSA goal with three minutes to play, but a whistle against HRA allowed the Lady Saints to clear the ball downfield.

NSA faces HRA again Tuesday in Newport News, with it being the Tidewater Conference match between the two schools.