Peggy Jean Williams was born on Nov. 5, 1941 in Gates County, N.C., to the late Geanie Parker Sr. and Dorothy Mae Boone. She went home to be with the Lord on Monday, Oct. 11, 2010 at Sentara Obici Hospital. She was preceded in death by her husband, Freddie Lee Williams, six brothers, and two sisters. 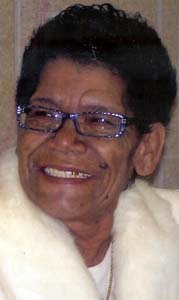 She was educated in Gates, N.C., and Suffolk Public Schools.

A funeral service will be held at 1 p.m., Monday, Oct. 18, 2010 at Tabernacle Christian Church, officiated by the Rev. Ronnie Boone. Interment will be at Carver Cemetery. The family will receive friends at 507 Chisholm Lane and 1840 Nansemond Parkway. Crocker Funeral Home is handling the arrangements. Condolences may be extended to the family at www.crockerfuneralhome.com.