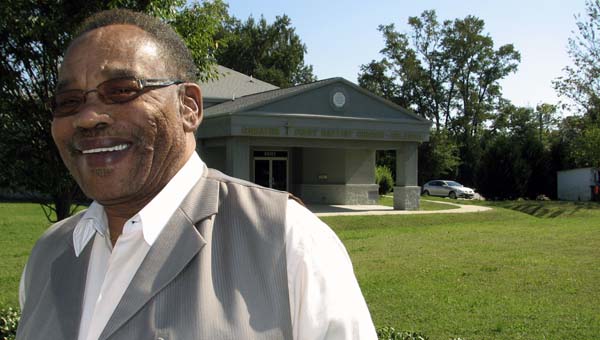 The Rev. Henry G. Baker will retire tomorrow after 35 years of ministry, many of them as the pastor at Greater First Baptist Church Orlando. Baker says he and his wife have been used by God as vessels to help enrich the surrounding community.

The Rev. Henry G. Baker walks down the streets of the Orlando neighborhood, pointing to homes that have been revitalized since he took over the pulpit at Greater First Baptist Church Orlando.

He passes the new church building, then the old one, then moves on to home after home that have been rehabilitated in the last decade.

Baker, who comes from a long line of ministers, came to the church in 1976 after he was ordained. He stayed nine years, then left for a church in Emporia. It was in 1994 that he was called back home.

“I had to make a choice, and I chose to come here,” Baker said. “It was clear that the church and community needed a lot of work.”

Baker will preach his last sermon at the church tomorrow. After 35 years in the ministry, he is retiring to allow room for the next servant God calls to take over the pulpit.

When Baker returned to Orlando 16 years ago, the church was in disrepair and membership was down. Worse, the surrounding neighborhood was suffering, he said.

“The community was more than blighted,” Baker said. “It was clearly the stepchild of the Suffolk community. [Some of the houses] were not really suited for habitation, in my opinion.”

The church had a plan to remodel the old church building, but Baker had a different vision.

“God gave me a vision to build a new church,” he said. “We got great cooperation from the community. It was an uphill struggle, but our people were faithful and they grasped the vision.”

The church soon had a new building, and revitalization in the community followed. The city and various agencies helped modernize infrastructure while homeowners updated their properties.

“It was God’s doing,” Baker says. “He simply allowed me to be a part of the miraculous ministry of the Holy Spirit.”

Baker’s elders were preachers, and he has a sister and two brothers who are ministers. He worked full-time as a social worker and rehabilitation counselor for many years at the same time he led the church.

Before that, though, he received a degree in sociology from Norfolk State University and was drafted into the Vietnam War.

“If you never knew how to pray, you learned how to pray then,” Baker said about the war’s battles. “I promised the Lord if He would deliver me safely from the jungles of Vietnam, I would do whatever He wanted me to do.”

And so Baker has done for 35 years.

“This is God’s house,” he said. “This is the body of Christ. It does not belong to me. He simply uses me as a vessel.”

Even so, Baker felt it was his time to go and allow a new minister to take over.

“I would prefer people ask me, ‘Why did he leave so early?’ than to ask ‘Why did he stay so long?’” he joked.

The church’s pulpit committee currently is searching for Baker’s successor. He doesn’t know who it will be but already is praying for him.

“I pray my successor will have the same joyful time that I have had,” he said.

The new season at the Suffolk Center for Cultural Arts already is shaping up to be an exciting one. As... read more