Warrior season is ending too soon 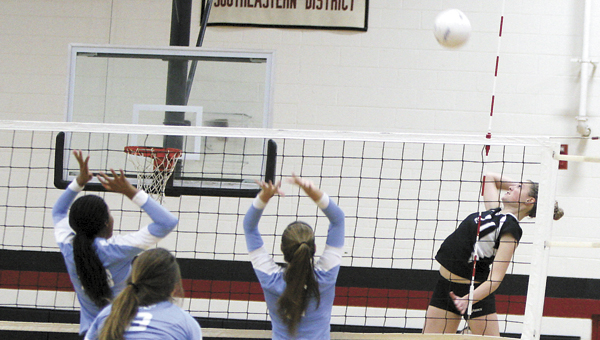 Nansemond River’s boys volleyball squad won’t make the Southeastern District Tournament when the regular season concludes next week. Strangely, that could be good news for the four schools that do.

After starting the season 2-7, the Warriors have won five of their last seven contests after Thursday night’s dramatic comeback over visiting Indian River.

As a coach understandably would, Warrior head coach Brian Briesemeister sees how his team is playing now from a couple directions.

“I really thought it should’ve started happening earlier,” Briesemeister said. “But we’re looking to keep developing for next season and it’s really nice to be beating teams who before were taking getting wins versus us for granted.”

Indian River, as well as Grassfield, who the Warriors upset a couple weeks ago, are good candidates to continue as far as the regional or even state tournament.

The first two sets of Thursday’s match weren’t much of a contest. Indian River led the rest of set one after going on a run after the set was tied at 7-7.

The Braves led set two by as much as 18-7 before the Warriors rallied, but couldn’t come all the way back.

The rally to close the second set, while it came up just short, sparked the Warriors some. A rally of four straight points late in the third set really flipped the switch.

After NR led most of the set, the Braves closed to within 18-17. The Warriors rebuilt a 21-17 lead and made it 22-17 on a point with a diving dig by Nathan Welch and Josh Howard crashing into the Warrior bench to keep Welch’s dig alive.

Briesemeister called a timeout with NR up 13-12. After a Brave point following the timeout, Michael Copeland got the call, putting down a Howard set to put NR ahead again. Copeland, who had only three kills and one block in the first four sets, blocked a Brave spike at the center of the net to take match point.

Champigny led NR with 14 kills. Howard totaled 35 assists. NR scored nine of its 10 blocks for the match in sets four and five.

“Tyler (Brown), our libero, really commanded the last three games with his passing. I don’t have all the stats added up yet, but I know he had 13 digs in the last two games alone,” Briesemeister said.

The Lady Warriors got out to fast starts in all three sets of their victory. Courtney Lowers and Danielle Gallagher did a consistent job of putting down spikes at the net.

NR scored the last six points of the first set, used a 10-3 run midway through the second set to win it easily and led 14-5 after winning seven straight points in the third set.