‘Hail to the Redskins’ 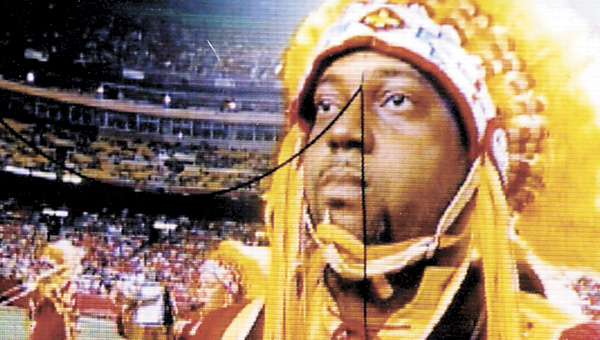 On the big screen: Greg Rodgers’ image is projected on the giant screen at FedEx Field during a recent game. Rodgers, a Suffolk native, performs with the all-volunteer Washington Redskins Marching Band.

When the Washington Redskins take to the turf at FedEx Field today against the Indianapolis Colts, Greg Rodgers will be in his customary seat in the club level, behind the Jumbotron video screen.

As a big ‘Skins fan, Rodgers will be cheering for the home team to upset the visiting Colts, but he’ll be at the game primarily to work.

Rodgers, a Suffolk native and 1978 graduate of John F. Kennedy High School, is a 20-year veteran of the Washington Redskins Marching Band, one of only two marching bands in professional football.

He is the band’s percussion coordinator and has been a big part of its development during his two decades of volunteer service, according to band director Eric Summers.

“Greg has a high level of professionalism and a high skill level,” Summers said in a telephone interview this week. “He’s made the percussion section a whole lot better. You’d think he was a music major.”

Rodgers plays the snare drum, but he has to know all of the percussion section parts in case someone is out sick for a game.

In his “normal” life, Rodgers, who also played in the percussion sections at JFK High School and at Norfolk State University, is a civil engineer with the Fairfax County Department of Public Works.

The Redskins band gig is part-time, and he does it for free, just like the band’s other 125 members.

That doesn’t mean, however, that it’s an easy assignment. There’s a waiting list for a chance to audition for one of the several spaces on the unit that might open up in an average year, and only the best of the best musicians — those who can sight-read music proficiently and even know a little about music theory — ever get a chance to march with the band and wear the trademark maroon and gold uniforms.

“They’re some of the best musicians in the metro area … actually, in the country,” Rodgers said this week.

The band members have included lawyers, members of the military, doctors, managers, engineers and a few actual music majors.

What they have in common, according to Summers, is this: “They love the Redskins, and they love playing music.”

Loving the unpaid job makes it easier to deal with the hours it requires.

Rodgers said the group practices every Wednesday night for two hours. He keeps his 12 percussionists around an extra hour and a half after band practice so they can work on their drum routines.

On the day of a home game, the band members arrive at the stadium at least a couple hours before kickoff to prepare for the pregame show. Members also sometimes march in a halftime show, and the percussion section presents a popular postgame show in the stadium’s hallway for fans as they leave the game.

Following Sunday’s 8:30 p.m. game, Rodgers doesn’t expect to get back to his Maryland home until around 3 a.m.

The Redskins Marching Band was founded in 1937 by George Preston Marshall, who brought the team to Washington, D.C., and wanted to provide fans entertainment “from the moment they walked into the stadium until the time they left to go home,” according to Redskins’ promotional material.

Since then the band has performed in parades, at private parties for NFL commissioners, at train stations and even on a stadium concourse during a Super Bowl. Rodgers and his percussion section also have performed at international tattoos.

The band plays Top 40 music, marches and medleys, as well as “Hail to the Redskins,” which every ‘Skins fan recognizes as the team’s fight song, played after every score by the home team.

Of course, some years, there are fewer opportunities to play that song than others. But Rodgers doesn’t let that bother him.

“The Redskins band has never lost a game,” he said.