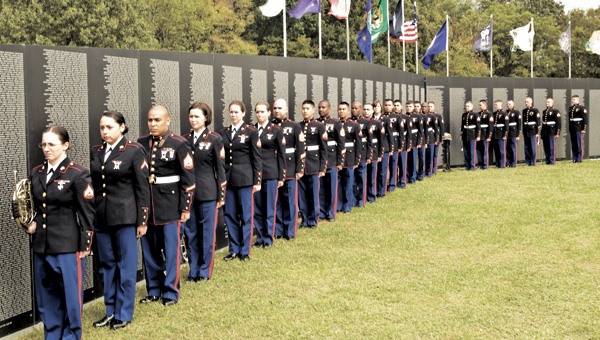 At attention: The U.S. Marine Corps band stands at attention alongside a replica of the Vietnam Veterans Memorial Wall that was brought to Bennett’s Creek Park for the weekend. The band performed at the park Thursday and Friday as part of the ceremonies associated with the exhibit.

Robert N. “Blake” Baker was in control of the events unfolding around him at the park on Friday, but still he looked a bit overwhelmed by it all.

“We knew it would be touching,” he said during a break from coordinating the events surrounding a visit by the American Veterans Traveling Tribute’s “Cost of Freedom” exhibit. “We just didn’t know how touching it would end up being.” 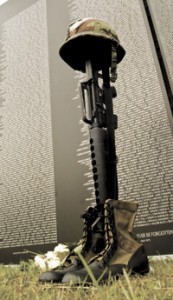 Memorial: A traditional field memorial to a fallen soldier stands in front of the replica of the Vietnam Veterans Memorial Wall that was brought to Bennett’s Creek Park for the weekend. The free exhibit will be open through Sunday.

For Baker, who is vice president of R.W. Baker & Co. Funeral Home in Suffolk, this weekend’s visit is the culmination of a year or so of planning for a special way to celebrate the business’ 125th anniversary.

“We just wanted to be able to do something to give back to the community that supported us for 125 years,” he said. “I know that’s a cliché, but it’s true.”

About a year ago, Baker saw another company celebrate its 75th anniversary somewhat less humbly, and he decided the funeral home should do something different for its own birthday.

He received some information online about the tribute through a veterans’ support website that the business partners with, and soon the idea was born.

Before long, he had found AVTT in Texas, and he was impressed with the scope of its tributes to American heroes.

The centerpiece at Bennett’s Creek through Sunday is an 80-percent replica of the Vietnam Veterans Memorial Wall. But there are displays commemorating every conflict in which Americans ever have fought. And every American who has lost his or her life in battle since the beginning of the Vietnam War is named somewhere in the exhibit. There is even a tribute to those who were killed in the Fort Hood shooting that took place in November 2009.

“What I liked about this (tribute) is that it didn’t just have the wall,” he said. “It’s all-encompassing. The wall is the main attraction, but everything else draws people for different reasons.”

For Baker, the desire to honor the military does not come from personal or family experience. There were men from the family in the active-duty military “if you want to go back to the Civil War,” he joked, but not in modern memory.

But he’s been exposed to veterans and their families during the military funerals that the funeral home hosts.

“A lot of the military funerals that we do are some of the more touching ones,” he said. “You always hear more stories. You hear a lot more emotional things from people who don’t normally talk about them.”

The same has been true during the first two days of the tribute’s showing in Suffolk. Baker said he has met some incredible veterans who’ve shared moving stories with him and other visitors.

And he’s been amazed at their willingness to help, along with the eagerness of other volunteers at the event.

“It’s amazing that you ask for help, and you get it,” he said. “When it’s the military, it touches people a little differently.”

The exhibit is open from 9 a.m. to 6 p.m. today and from 1 to 6 p.m. on Sunday. There are scheduled events for both days, but visitors are encouraged to stop by anytime. The schedule for the remaining days follows: