Cordero and Ashcraft get married

Ashley Danielle Cordero and Brandon Thomas Ashcraft, both of Suffolk, were married in an elegant evening ceremony at 6 p.m. on July 10, 2010 at Half Moone Cruise and Celebration Center in Norfolk. Danielle is the daughter of Victor “Tony” and Deena Cordero, of Portsmouth. Brandon is the son of Thomas and Cheryl Ashcraft, of Suffolk. 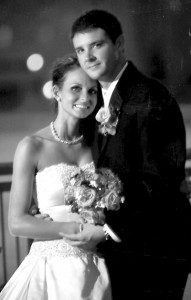 Ms. Cordero chose a white Judd Waddell silk-satin ball gown with hand-embellished vintage lace at the top of the bust line and dropped waistline. The gown was finished with crystal buttons in back and a lace medallion at the bustle. She chose a full veil trimmed in crystals. Danielle carried a round bouquet featuring Stephanotis with black pearl pins, magenta dendrobium orchids, green fugi mums, orange gladiola blooms, milva roses and purple lisianthus.

The Rev. Michael Halley officiated the traditional wedding ceremony. Tony Cordero escorted his daughter to the traditional wedding march by Mendelssohn. The chairs featured white satin covers, and the aisle was lined with tall cylinders filled with orange, long-stemmed calla lilies. Flowers completely surrounded the couple as they said their vows. Soaring glass windows framed the altar area. A large swag of flowers hung in the windows with a cascading curtain of crystals and orchids trailing below it. Two large altar arrangements further defined the space. A quartet of stringed instruments provided music prior to the ceremony and played the wedding march.

Cousins of the bride, Adam Malik and Natasha Malik, of New Rochelle, N.Y., read the scripture lesson. The couple lit the unity candle while Elizabeth Miniard sang “Keeper of the Stars.”

Friends of the bride were her attendants: maid of honor, Ginger Rawls; matrons of honor, Alicia Davis and Ashley Morgan; bridesmaids, Katherine Rawls, Kristen Brown, Judith Payne and Margaret Farris. The attendants wore strapless, full-length black gowns of satin with an overlay of chiffon, empire bodices and flowing skirts. Each of the attendants carried a smaller version of the bride’s bouquet.

Lauren Oliver, Meredith Oliver and Michaela Noel served as flower girls. They wore fuschia tea-length dresses and dropped rose petals in a variety of colors as they preceded the bride down the aisle. Honorary attendants Katrina Ward, Jasmine Ward, Haili Byrd, Korrine Johnson and Natasha Malik tended to the guest book and programs.

The groom wore a black and white tuxedo with a boutonnière of an orange milva rose, a dendrobium orchid and a Stephanotis bloom. Brandon’s father served as best man. Groomsmen were Christopher Ashcraft, Justin King, Patrick Walter, Victor Taglis, Matt Revelle and John Joyce. Ushers were Cody Jones, Kyle Jones and Adam Malik, cousins of the bride; and Loren Farris and John Rawls, friends of the couple. The groomsmen and ushers wore black tuxedos and boutonnières similar to the groom’s.

After the ceremony, guests were offered hors d’oeuvres and drinks prior to the reception. Crystal chandelier trees overflowing with flowers and rose accents decorated the lounge area. The cocktail tables had cube vases with floating fugi mums and glowed with purple lights.

The tables in the reception hall at Half Moone carried out the vibrant colors of the wedding. Each table had a large black cylinder vase filled with the mixed flowers of the wedding. The linens and chiavari chairs were black, and the napkins were orange and pink with green highlights.

The dance floor had a custom floral and crystal chandelier, constructed of wood with lighted pink orchids strung underneath. Crystal swags hung from each side, and more than 250 stems of flowers accented the structure. The four food stations featured different color themes, with giant crystal trees made of manzanilla trees strung with crystals and beads. The pots were filled with flowers, and flowers hung throughout the trees. Guests enjoyed an array of seafood, beef, salads, vegetables and breads.

The couple’s first dance was to “You and Me” by Kenny Chesney. Danielle danced with her father to “It Won’t Be Like This for Long.” Mr. Cordero then surprised his daughter with a live Motown band, The Moonlighters, from Washington, D.C., to play her favorite song, “My Girl,” for a second father-daughter dance. Brandon chose “Twenty Years Late” to honor his mother for their first dance. A DJ provided music for the rest of the evening.

The couple encouraged their guests to take photos in a photo booth for their keepsake album. Stations provided a large variety of candles for the guests to enjoy.

Prior to the wedding, the couple was honored at several events hosted by Mr. and Mrs. Cordero, Mr. and Mrs. Jimmy Oliver and Mr. and Mrs. David Rawls. Karen Ward, aunt of the bride, and Alicia Davis, matron of honor, gave showers to honor the bride. The bride’s attendants went on a cruise to the Bahamas. The groomsmen went to Las Vegas for a weekend. The night before the wedding, Mr. and Mrs. Thomas Ashcraft hosted the rehearsal dinner at Brutti’s in Portsmouth.

The newly-married Mr. and Mrs. Ashcraft left Half Moone in a horse-drawn carriage to spend their wedding night in Norfolk. The couple flew out of Norfolk the next morning for a honeymoon in Antigua. The couple now resides in Suffolk.