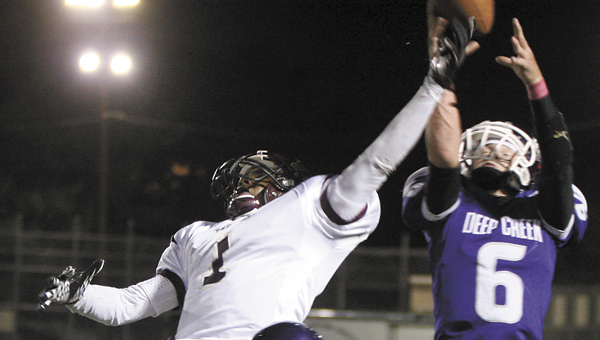 CHESAPEAKE — Deep Creek celebrated its homecoming night in the 100th year of the high school with a 33-6 win over King’s Fork Friday night.

The Hornets led 7-0 at halftime before scoring three touchdowns in the third period.

King’s Fork (0-7, 0-6) was looking for its first win and faced a tough enough challenge without giving the Hornets any help. The Bulldogs did so anyway, giving away five turnovers and 136 yards worth of penalties.

The first 20 minutes of the game were played entirely in Deep Creek territory, but the Hornets held the Bulldogs off the board.

King’s Fork advanced as far as the Hornet 12 on its first drive. KF’s triple option, mainly with carries by quarterback Matt Hommell and fullback Karon Adams, put the Bulldogs in position to score, until a bad pitch by Hommell resulted in a fumble and a Deep Creek recovery.

Early in the second quarter, Adams broke a fullback dive for a 25-yard gain to the Hornet 11.

On the following third down, from the DC 8, Hommell kept the ball around the end and was hit hard. He left the game injured and didn’t return. Junior backup DeQuan Fofana came in under center for the Bulldogs.

Deep Creek’s first possession of the second half needed only two plays before Stewart raced around the right end and down the sideline for a 40-yard touchdown run, making it 14-0 Hornets.

The Bulldogs moved the ball well on occasion in the second half, but three lost fumbles and penalties turned the game into a rout.

Early in the fourth period, the Bulldogs got out of a 3rd-and-30 situation with two complete passes by Fofana. Fofana threw to Davon Grayson for a 32-yard gain on fourth down. The next play, from the Hornet 14, ended in a fumble.

Lawan Brown’s 63-yard run was the big play on a 94-yard Bulldog drive for their only score. Fofana scored on a 2-yard run.