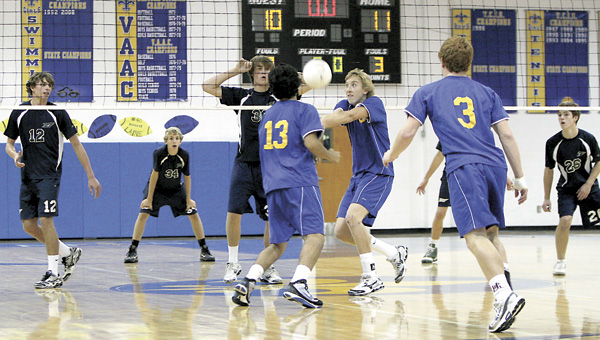 Nansemond-Suffolk’s Wesley Edwards sets during NSA’s sweep over Trinity Episcopal Friday. Edwards played his usual position as a hitter for the first two sets, then played setter and notched 12 assists in the third set when NSA’s primary setter, Ray Ramirez, left in order to travel to Princeton University for a campus visit and meeting with the Tiger volleyball coach Saturday morning.

There were two good, understandable reasons why the Saints could’ve lost the match.

NSA’s senior setter and co-captain Ray Ramirez played the first two sets of the match and did his usual great job setting, digging and serving for the Saints. Quietly in the break before the third set, Ramirez left.

Fellow co-captain Wesley Edwards, the top hitter for the Saints, filled in very well at setter in set three and NSA continued on for the sweep.

“We practiced on Wednesday with what our rotation would be without Ray here,” Bossick said.

The second reason also had to do with college recruiting and an important campus visit, but not for volleyball.

C.J. White, NSA’s starting goalkeeper on the lacrosse field, has committed to play lacrosse at Hampden-Sydney. He had a meeting with HSC’s lacrosse coach set for Friday, but was able to postpone the visit a day so the Saint volleyball squad wouldn’t be two players short.

“And we needed him here,” Bossick said. “He brings leadership, hustle and he always is great in that department. He hustles in practice day in and day out.”

NSA led 23-16 in the second set before Trinity Episcopal closed in to make it a tight finish. Ramirez made his last couple points count before hitting the road to New Jersey.

Instead of his usual set for a teammate, Ramirez dumped kills, seeing open spots on the Titan side of the court, for points 24 and 25.

After leading the Saints in kills in the second set, Edwards contributed 12 assists in the third set. The teams traded the lead through the game. NSA lead 18-16 before the Titans rallied to take a 24-20 lead.

The Saints fought off all four set points and kept going to win the game 27-25.