Mr. and Mrs. Ray Russell are pleased to announce the engagement of their daughter, Meagan Elizabeth Russell, to James Walter Horton Jr., both of Suffolk, Va. 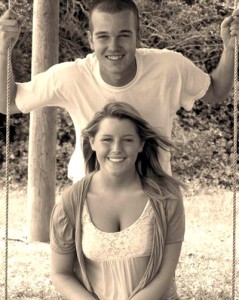 James is the son of James Horton, of Suffolk, and Julie and Wayne Scott, of Chesapeake, Va.

Meagan is the granddaughter of Larry C. Small and the late Donna Small, of Waynesboro, Va. Meagan’s paternal grandparents are Dorothy Russell and the late Percy Russell, of Suffolk.

James is a 2008 graduate of Western Branch High School and is currently employed with Northrop Grumman Shipyard.

Meagan is a 2010 graduate of Nansemond River High School and is currently pursuing a career as an occupational therapy assistant at Tidewater Community College.

The couple will marry on May 21, 2011 aboard the Spirit of Norfolk.

Cordero and Ashcraft get married

Ashley Danielle Cordero and Brandon Thomas Ashcraft, both of Suffolk, were married in an elegant evening ceremony at 6 p.m.... read more