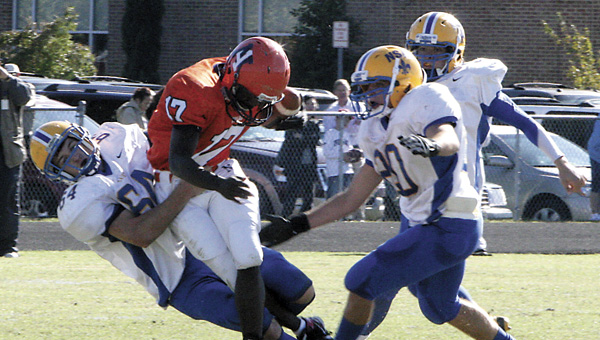 Gang tackle: Nansemond-Suffolk’s Ryan Serianni (64) and Thomas Westfall bring down a Norfolk Academy runner in the backfield Saturday at Norfolk Academy. Westfall returned a fumble 65 yards for a touchdown in the second quarter. NSA went on to a 28-7 win.

NORFOLK—Senior running back Ryan May rushed for two of his three touchdowns and 111 of his 156 yards in the second half to lead Nansemond-Suffolk over Norfolk Academy 28-7 on Norfolk Academy’s homecoming.

The victory snapped a three-game losing streak for the Saints (2-5, 2-1) yet it also kept them in the midst of the race for the Tidewater Conference of Independent Schools football title with three weeks left to the season.

“Actually this does a lot because losing is contagious. To get a win under our belt means we can continue to next week, next week’s practices and game, and keep working. It’s easier to stay motivated and have some fun after a win,” said NSA head coach Kevin Allen.

NSA’s offense, more specifically its running game, didn’t get completely going until the second half, but the Saints still led 14-7 at halftime against the winless Bulldogs.

The Saint defense gave their offense great field position for one touchdown in the first quarter and scored six points itself in the second quarter.

Getting the ball on the NA 29 for its second possession, NSA took advantage with a 14-yard pass from Domonique Lennon to Bobby Lamm and a 15-yard touchdown run by May.

The Bulldogs moved into NSA territory looking for a tying score. On a Bulldog passing play, Ryan Serianni and A.J. Hicks sandwiched the NA quarterback and the ball came free. Thomas Westfall scooped up the fumble and ran all alone for a 65-yard return for a touchdown.

Lamm was 4-for-4 on point-after kicks. On the last play of the first half Lamm and the Saints went for a 62-yard field goal that was blocked.

The Saints took command with their first two drives of the second half. May got the call, mostly going straight ahead through the line, for almost all of the Saint yardage.

May rushed five times for 63 yards and broke off right tackle and down the right sideline for a 36-yard touchdown run on a 69-yard NSA drive to make it 21-7.

After stopping the Bulldogs to a three-and-out, May rushed on five of seven NSA plays and powered into the end zone on a 5-yard run.

Norfolk Academy moved down the field on a 20-play drive, taking 11:19 off the clock, only for three false start penalties to bring up a 4th-and-goal play from 24 yards away. Lennon intercepted a pass lobbed toward the end zone.

Serianni led NSA’s defensive effort with five tackles for loss plus his role in the forced fumble. Three NA quarterbacks were 2-for-13 passing.