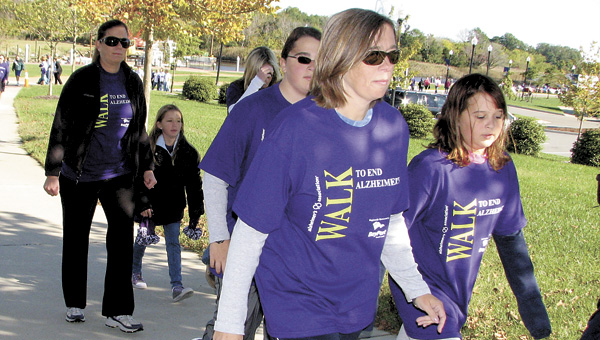 Walkers set off on a one-mile tour of downtown Suffolk during the 2010 Memory Walk for the Alzheimer’s Association on Saturday. Supporters raised more than $35,000, meeting the goal for the walk.

The Alzheimer’s Association has been moving its fundraising walk around Western Tidewater the past few years, but administrators think it may have found a home in Suffolk.

“It was absolutely fabulous,” said Patricia Bartosch, the association’s director of development. “We hit our goal this year already and have been invited back, and we want to come back. I think we’ve found a home.”

Bartosch said this is the first Western Tidewater walk that has made its goal in the three years she’s been working for the association.

The walk is one of nine in the Hampton Roads area that are put on by the Alzheimer’s Association with the goals to raise funds for a cure, to provide assistance and awareness for those directly affected by the disease and to educate the community about its grave reality.

The walk has been held in Franklin, Lake Prince Woods retirement community and Smithfield in the past. Administrators moved it to downtown Suffolk this year with the hopes of making it more visible and central to other localities.

“We need to make a statement that we’re here and this disease is real,” Bartosch said. “The time has come for us to be as visible as we can be. We pondered long and hard about where to move because we needed a central location that everyone would come out to, and this year we had people from Emporia, Isle of Wight and Smithfield come out.”

The walk received the support of the city, the Parks and Recreation Department and the local non-profit organization Suffolk on the Move.

“We really felt welcomed and supported by the entire community,” Bartosch said.

The association has until Nov. 15 to collect additional donations for its fiscal year.

For help with your loved one suffering from Alzheimer’s, call the organization’s 24-hour toll-free number 800-272-3900.