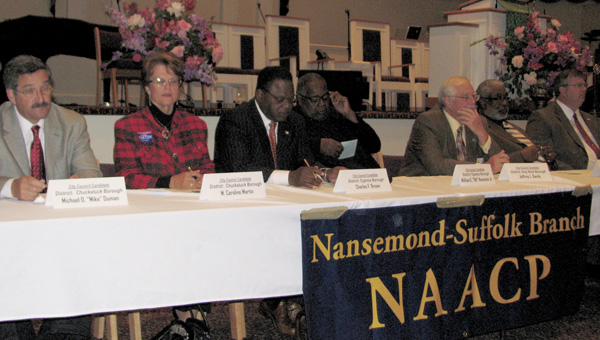 City Council candidates responded to questions about numerous subjects during a forum hosted by the NAACP Monday night.

Seven City Council candidates responded to questions on subjects ranging from term limits and sidewalks to the U.S. Joint Forces Command and the Suffolk Initiative on Youth during a public forum Monday.

Sponsored by the Suffolk Nansemond NAACP chapter, the meeting drew about 40 spectators to Tabernacle Christian Church on East Washington Street. Chapter president Charles Gates was disappointed at the attendance level.

“It is quite sad, in some senses, that we don’t have more people here,” he told the audience before posing his first question.

The forum featured a handful of prepared questions and some submitted by audience members. Each candidate was also permitted to make opening and closing statements.

Asked about their plans in the event of the closing of the Joint Forces Command, a massive military concern in North Suffolk, many candidates were optimistic.

“We’ve already proved it is possible to attract other companies,” Mike Duman said. “[Health care is] another industry that would probably be suitable.”

“We already are a leader in health care delivery in many respects,” Martin said, pointing out that health care technology is a logical step. She added Suffolk should get “more of those eggs in the private sector budget” rather than the military.

Charles Brown, the Cypress incumbent, lauded the teamwork the city has exhibited since the announcement of the potential closing.

“Every problem creates an opportunity,” he said. “We still have a good location. This is going to be a good opportunity for us.”

Holy Neck incumbent Jeff Gardy gave credit to the Economic Development Authority for working to create jobs in the city.

“They are really out there … the last four years preparing for tough times,” Gardy said.

Gardy’s challenger, J.B. Varney, was absent from the forum. Gates said Varney had a family emergency.

Alvin Copeland, the challenger in the Suffolk borough, is convinced JFCOM will close and that Suffolk should prepare for when it happens.

“I want Suffolk to be competitive,” he said. “This is part of that storm I was talking about.”

“There’s a lot of opportunity, and Suffolk is the belle of the ball,” he said.

Each of the candidates also gave their opinion on what should be done about the replacement of Robertson and Southwestern elementary schools.

Duman, whose sister is the principal at Robertson, said in a “perfect world,” Southwestern would be replaced and Robertson would be renovated. However, if one school is built, it should be centrally located.

“If it goes against the comprehensive plan, change it,” Duman said.

Martin began her response by advocating regular joint meetings between City Council and School Board, not just when there is a problem that needs to be solved.

“Decisions should be made based on facts and planned growth,” she said of the new school.

Brown said he feels the school should be built “where growth will be in the future” — a place he defined as along U.S. Route 58.

Newsome advocated the one-school replacement concept but insisted the decision on location should remain with the School Board.

“If they want it, it’s our job on Council to fund it,” he said. “The one-school concept, I think that’s what they should do, but again it’s up to the School Board.”

Gardy advocated building one school and said its location does not matter to him as long as it is built.

Copeland left the decision entirely up to the School Board.

“You need to let the School Board handle that,” he said. “Let them do their job.”

Parr said he supports closing the two current schools and replacing them with one school.