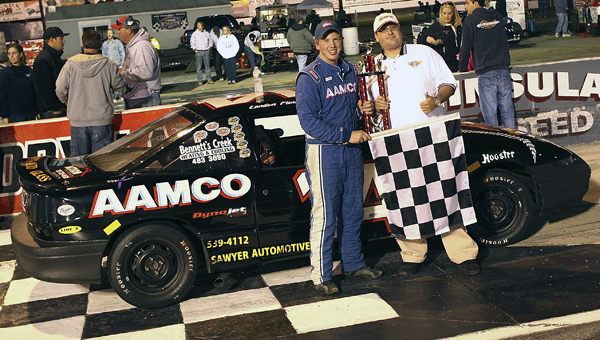 By Gary Daughtrey
Special to the News-Herald

Joe Scarbrough set the pace in time trials and went on to his second Modified win of the year.

Fans expecting an old-fashioned donnybrook were rewarded on the opening lap as Stinson latched onto Balluzzo’s rear bumper and carried him into the first turn. Balluzzo saved his car but dropped to 11th place. Stinson emerged from the scrum in sixth.

On a restart on lap 15, Balluzzo exacted his payback on Stinson, spinning the No. 4 machine in Turn 4. Several drivers, notably Rusty Wood, were collected in the fracas as a yellow flag was unfurled.

During the ensuing caution period, Wood and Stinson both took shots at Balluzzo’s car and earned early exits from the festivities. With Stinson parked, the championship chase was effectively over.

“It was ugly. We expected something. I didn’t really expect Thomas to do what he did on the first lap. I thought we’d at least race a little while, but he tried to crash me on the first lap. And, then, his teammate tried to finish it,” Balluzzo said.

In the 40-lap Pepsi Grand Stock feature, Ricky Derrick took the lead for good on lap 38 and capped off his second straight division title with his second victory of the season.

Ritchie German moved out front on the ninth circuit and sailed to his first win of the season in a 40-lapper for the Langley Fan Club Super Streets. Randy Sample clinched his second straight division crown by simply taking the initial green flag.

Putting an exclamation point on his championship-winning campaign, Robbie Davis took the lead on lap 2 and rolled to his 10th victory in the 25-lap Larry King Law Super Truck race.

In the 25-lap points finale for the EZ Auto of Newport News UCARs, Landon Florian took the lead for good on lap 24 and posted his third win in a row. Meanwhile, points leader Michael Joyner was plagued by early-race problems. Title contender Sammy Gaita couldn’t take advantage, though, as Joyner held on claim the crown.

In the evening’s final race, a 50-lap Enduro event, Danny Harrell took the lead on lap 14 and cruised to his third win, bagging the division title in style.

With the points campaign in the books, Langley Speedway moves on to the postseason portion of its calendar next Saturday, hosting the Super Street Showdown and the Virginia State UCAR Championship.