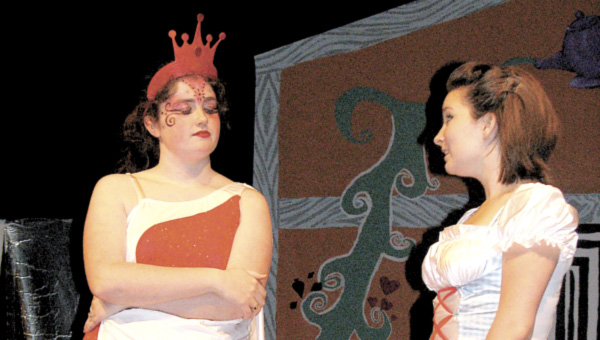 Rehearsal: Lakeland’s Queen of Hearts and Alice rehearse for the opening night of “Through the Looking Glass,” which the drama department featured in April. The department recently received a $1,000 grant to help fund its programs this year.

At Lakeland High School, students in the theater program are learning more than acting.

The drama department recently received a $1,000 grant from Target for the students’ community service.

“We are so excited to receive this grant,” said Sara Beth Sims, director. “It’ll give us a chance to upgrade our equipment and branch out and offer more to students.”

Sims said she hopes to purchase some wireless microphones for the students and offer more free performances for elementary schools to expose more students to the dramatic side of literature.

“We’re really hoping to expand the community outreach we’ve been doing,” Sims said. “It’s important for students to learn that life is bigger than them. They can use theater to give back. Every story has a moral to share with others.”

Previous community outreach includes performing Reader’s Theater at Kilby Shores Elementary School, bringing elementary students to the high school performances, such as this past spring’s “Alice in Wonderland” musical, sharing the stage at the Suffolk Center for the Cultural Arts for a free sample of its one-act competition production and participating in canned food drives.

This year the department will include four different shows.

The drama department is currently working on “Tuesday Morning,” an original play by senior Ian Cross, which focuses on the impact of the Sept. 11, 2001 terrorist attacks on the lives of New York City students.

“We are very excited to see this play put to life on stage as we remember and honor those who fought for our freedom one way or another,” Sims said.

Performances are set for Nov. 4-7.

Students will also produce the comedy “He Said, She Said” for their regional one-act competition piece in mid-January.

In April, Lakeland will present the musical “A Connecticut Yankee,” based on the life of Mark Twain.

In late May, drama students will step into leadership roles to direct their own scenes from literature. The tribute to some of the greatest writers throughout time will double as a way for drama students to reach beyond acting to directing.

“I hope that through this, students will learn that life is bigger than them and how to use theater for others,” Sims said. “The play doesn’t belong to you. It belongs to the people who see it.”

Winning as a team