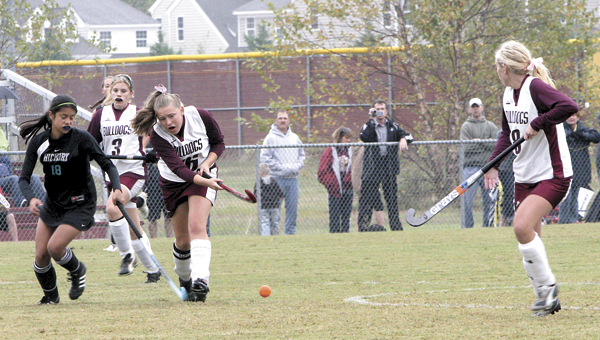 College sports teams can usually find a way to soften their schedules for special dates such as homecoming and senior days.

Hickory opened the scoring in the ninth minute and led 3-0 at halftime. The match barely beat what little sunlight there was on the overcast day as Hickory arrived at 5:05 p.m. for the 5 p.m. start and the match started about 25 minutes late.

While all eight seniors played, for a stretch of the second half eight of the 11 Lady Bulldogs on the field were underclassmen. Building for upcoming seasons has been a prime goal for Nicholoff since preseason practices in August.

“I wanted to instill hard work, commitment and respect in them, all the core values I think all athletes should have,” Nicholoff said.

“We spent a lot of the season breaking bad habits. We did that and now we’re starting to get to field hockey plays and field-hockey-specific skills,” Nicholoff said, “I’m really looking forward to next season.”

“Both will be fantastic additions to whatever school they choose to go to,” she said.

Carving out some fun