Winning as a team 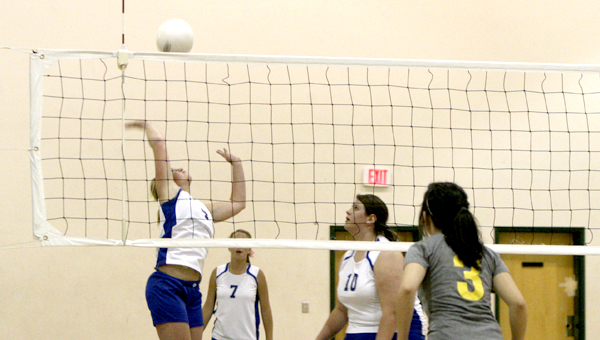 Booming shot: First Baptist’s Morgan Overton sends a shot over the net against OakTree Academy Tuesday in the semifinals of the 7 Cities Athletic Conference Tournament. The Lady Crusaders beat OakTree 25-15, 25-17, 25-16.

First Baptist cruised into the final match of the 7 Cities Athletic Conference girls volleyball tournament Tuesday with a three-set win, 25-15, 25-17, 25-16, over OakTree Academy at Calvary Assembly of God Church in Virginia Beach.

Balance, in play and statistically, carried the Lady Crusaders in Thursday night’s championship match. First Baptist’s serving and attacking was spread across the board in a very productive, and even funny, way.

“We’ve raised our standard of play quite a bit in the last three matches,” said Joe Cockrell, First Baptist’s head coach. “We still haven’t fully put it together like we can, but it’s obviously a lot better.”

The Lady Crusaders entered the tourney as the No. 2 seed in the conference. Each set Tuesday night was a steady result, with the Lady Crusaders pulling away from No. 3 OakTree for easy wins.

First Baptist ran off five straight points on Cockrell’s serve to gain a 9-4 lead in the first set. The Lady Crusader lead was quickly up to 14-5 and 18-6.

The second set was closer for a little while. First Baptist still pulled away a couple points at a time for a 13-8 lead. May put down a spike, Cockrell scored a kill and May served an ace to take the lead to 16-9. OakTree didn’t get within four points the rest of the set.

First Baptist jumped out to a 7-2 lead in the third set. OakTree closed within a 19-15 FB lead before good service runs by May and Christine Joslin ended the match. Joslin served back-to-back aces for the last two points.

It took some of the season for the Lady Crusaders to get used to a two-setter rotation, with Cockrell and Morgan Overton as the setters. Since both are good all-around players, Joe Cockrell said he did not want one to have all the setting duties.

“They’ve really started to know where they’re supposed to be and they’re getting the ball up so the hitters can really swing at it,” he said.

The Lady Crusaders will play the winner of Tuesday’s late semifinal, Gateway Christian vs. Veritas Christian, Thursday at 7 p.m.