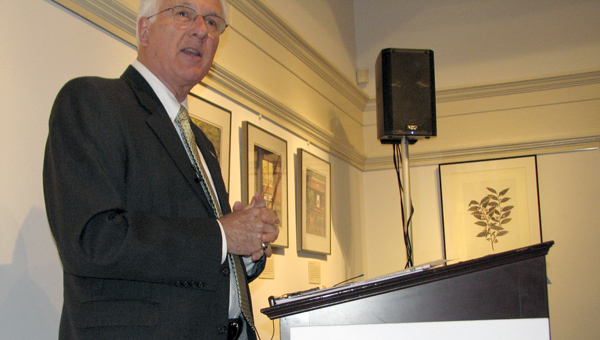 John Stone posed questions to City Council candidates on land-use philosophies, the role of council members and more in a forum Thursday sponsored by the Hampton Roads Chamber of Commerce.

A two-hour forum sponsored by the Hampton Roads Chamber of Commerce brought together all eight City Council candidates to respond to questions on economic challenges, government waste, land use philosophies and the need for a new City Hall.

About 60 people attended the meeting, held in an art gallery at the Suffolk Center for Cultural Arts. John Stone, a longtime Chamber member, moderated the forum, posing questions that were crafted by the Chamber’s board of directors.

Almost across the board, the candidates agreed a new City Hall is needed and quickly, but they had different ideas on where to put it and how to pay for it.

But Jennings “J.B.” Varney, challenger in the Holy Neck borough, said he’d like to seek a “second opinion” on the project’s urgency.

“I need to be convinced,” Varney said. “Is it the most important thing on the priority list? I’m not convinced at this time.”

A consultant told council members last month that emergency fixes on the current Market Street building would cost about $3 million.

Varney’s opposition, incumbent Jeff Gardy, said the project is needed quickly, but he added he has no opinion on where to put the new building.

Responding to a question about government waste, the three incumbents were mostly united in insisting there currently is no waste in the city, though Suffolk borough representative Charles Parr noted there are “always opportunities to be more efficient.”

The five newcomers, however, identified a number of places where they would make cuts if elected.

“We’ve got a tremendous amount of waste in this city,” Parr’s challenger, Alvin Copeland, said.

Varney rattled off a list including the media and community relations department, the Prentis Street project and extra security for City Hall as examples of wasteful spending. He said he would put the extra money into infrastructure improvements.

Gardy, however, did not identify any areas of extravagance.

“I don’t think right now we’re operating at any waste,” he said.

Candidates also were asked to identify economic challenges facing the city and the qualifications they would bring to the table in solving them. Many pointed to the housing and job markets as issues.

Caroline Martin, who is running for the open Chuckatuck borough seat, suggested capitalizing on natural resources and high-tech growth to help jump-start the city’s rise out of the recession.

Martin’s opponent, Mike Duman, suggested attracting growth by making the city more business-friendly. Making changes to the city’s Unified Development Ordinance would be one way of doing so, he said.

“I think it’s way too voluminous and too hard to enforce,” Duman said.

Candidates also responded to questions about land use and zoning decisions, many specifically referring to the comprehensive plan.

“Nothing in the plan should be so set in concrete that it cannot change,” said Charles Brown, the Cypress borough incumbent. “But if you change it every time the wind blows, do you really have a plan?”

His challenger, William Newsome, expressed more lenience about changes to the plan.

“Just like any game plan, when the game is not going in the right direction, you have to make changes,” Newsome said.

A Norfolk-Southern engine prepares to take local dignitaries and other visitors on a train ride from Norfolk to Petersburg and... read more