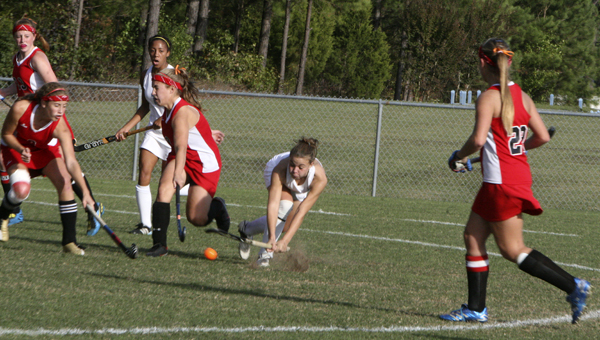 It was Senior Day for eight of the 15 varsity Lady Cavaliers. There was fun and ceremony following the match for the Lady Cavalier players, coaches and parents. During the match, there was still work to be done and Lakeland head coach Tara Worley wasn’t entirely pleased even while her side scored two early goals and took the 2-0 lead to halftime.

Similar to a Lady Cavalier win over Hickory last week in Virginia Beach, Lakeland didn’t dominate the possession and tilt the field entirely into the opponent’s end for some stretches of the first half.

The Lady Warriors, who face a rematch against their city rivals in the district tournament semifinals Wednesday, were able to clog up the last 30 yards or so of their end and take some of the match away from their goal.

Nevertheless, Lakeland still allowed no shots on goal in the match and the Lady Cavaliers got on the board less than six minutes in when Summer Parker knocked the ball into the cage out of a scrum right in front of the goal after Kelsey Smither’s drive on goal was stopped by NR keeper Lindsey Hunter.

Parker scored her second goal five minutes later, putting her shot away off a cross by Kendell Combs.

Even with the lead, when the Lady Cavaliers gathered in their goal at halftime, healthy parts of Worley’s halftime talk were no secret to anyone hanging around Lakeland’s field.

The Lady Cavaliers (15-0, 9-0) went on to double their lead in the second half. Smither scored in the 44th minute and Combs converted a penalty stroke with 5:53 remaining.

Hunter finished with 14 saves for the Lady Warriors.

“It’s not only the players who are the reason we have had success, it’s the parents as well,” Worley said during a post-match ceremony honoring her seniors.

“It’s going to be hard when this season ends,” Worley said.

Lakeland reached the state tournament for the first time in program history with all eight players on the varsity squad last season.

This season, the Lady Cavs completed their nine district wins outscoring their opponents by 61-0.

Nansemond River (10-4, 6-3) has one tune-up, Friday afternoon at Grafton, before facing the Lady Cavaliers in Virginia Beach on Wednesday.