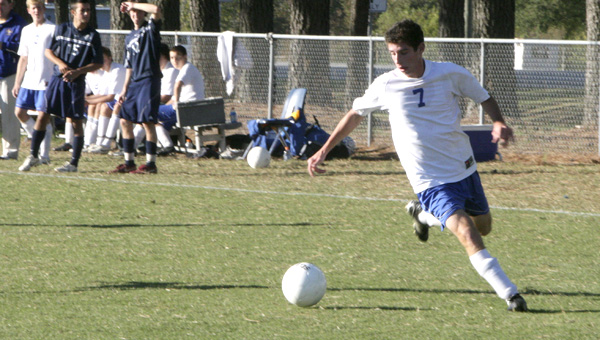 Nansemond-Suffolk’s soccer squad has to face Tidewater Conference season champion and state title contender Cape Henry in the quarterfinals of the conference tournament Tuesday, but at least the Saints are still playing.

Thanks to a 3-0 win over visiting Hampton Roads Friday afternoon, the Saints (6-11-2, 2-6-0) finished as the eighth and last team to qualify for the TCIS Tournament.

Dedicated, organized defending by the whole team and opportunistic scoring will be the way the Saints to have a chance against the No. 1 Dolphins Tuesday and those abilities led to Friday’s win.

Hampton Roads outshot the Saints 18-13 and Florian, NSA’s goalie, came up with a couple diving or one-handed saves in each half to keep the shutout.

The Navigators also forced the Saints into a 15-5 disadvantage in fouls, with a number of the whistles leading to dangerous free kicks for HRA. NSA’s defense hung on through all of those as well.

Sharrett put NSA ahead seven minutes in with the Saints’ first shot on goal.

Wide midfielder Preston Firnstahl moved with speed down the left wing and sent a cross high toward the far post. Sharrett raced toward goal unmarked and touched it by the keeper from short range.

NSA made it two goals in three shots on goal seconds before halftime. Tucker Firnstahl and Sharrett combined to move the ball down the left side, leading to Sharrett lobbing the ball into the Navigator box.

Taves battled two HRA defenders near the penalty spot, first heading the ball straight up before finding the ball on the bounce and striking a right-footed shot into the goal.

Another long ball and quick strike gave NSA its 3-0 lead early in the second half. Again, Preston Firnstahl, but this time from 40 yards away, sent a ball for Sharrett running into the HRA box. Sharrett controlled the pass with one touch and put his second touch just inside the right post for the goal.

“You can’t look at (Hampton Roads’) record. If you look at the scores of their games, they beat Norfolk Collegiate and lost 1-0 against Norfolk Academy. A lot like us, it seems everything’s been one-goal games. This is a good win for us,” said NSA head coach Art Truesdell.

“This was our best defensive game all year. We didn’t let HRA get a player behind us and we stayed very organized in the back,” Truesdell said. Truesdell especially credited junior Stuart Gill, his left back, for marking HRA’s top scorer.

“This is a good group of seniors and they should be playing next week,” Truesdell said.

NSA lost 7-1 and 4-1 in its two meetings with Cape Henry during the season. Cape Henry hosts the quarterfinal Tuesday at 4 p.m.