Efficiency at its finest 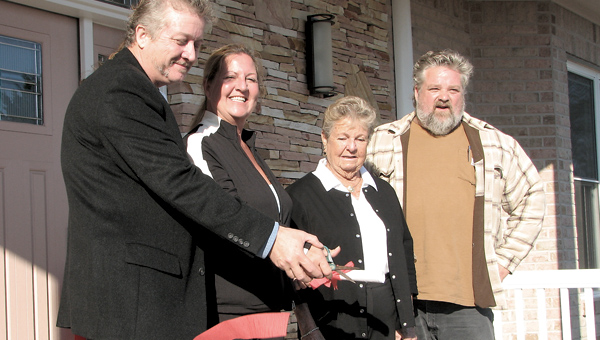 Ribbon cutting: Linda Stewart cuts the ribbon on her new home with Keith Greer, general manager of Ebb Tide Construction and Development and her parents.

Linda Stewart’s Badger Road home very well may be the most “green” thing in Suffolk — if not on the entire East Coast.

After a year of construction, Stewart’s EarthCraft-certified home was recently completed and has received a “Tier 3” platinum level designation, the highest level of certification issued by EarthCraft, which helps provide a framework for designers and builders developing energy-efficient homes in the Southeast.

“We’re so excited to be able to have moved in,” Stewart said. “What can I say? I’m just a tree hugger. I don’t think I can save the planet or anything with this house, but I want to do what I can.”

According to Keith Greer, general manager of Ebb Tide Construction and Development, which built the home, the home racked up more than 365 points for its green components. Pending verification from inspectors, it has the most points of any EarthCraft home on the East Coast.

The $1.3 million, 4,600-square-foot home was no easy or inexpensive venture, but Stewart was more than happy to make the monetary sacrifices for the three-bedroom, three-bathroom home that sits on 14 acres of land.

The home features redundant green power sources, sustainable construction techniques and materials and a design that incorporates the latest ecological advancements, according to Greer.

Finishes in the home are top-grade, Greer said, with Australian cypress wood flooring; granite countertops; stone entries; sprayed-on closed-cell and cellulose insulation, including in the crawlspace and attic; a captured-rainwater irrigation system and more.

The environmentally sensitive flourishes, though, are supported through tax breaks and will partially pay for themselves in the long run.

A geothermal mechanical system is expected to be much more efficient than other HVAC choices; highly efficient windows and highly insulated walls, ceilings and floors will ensure a tightly closed system; and the home will be powered by both wind turbines and solar arrays, which could generate enough power to sell back to Dominion.

Some personal touches include a pet-washing station, energy-efficient washers and dryers off the garage and in the bedroom, a chandelier in a bathroom, a whirlpool bathtub and surround sound throughout the home.

The advantages of an EarthCraft home are numerous, Greer said.

“It’s easy and less expensive to maintain,” he said. “You’re not taking away from the earth of unnecessarily destroying trees or using chemicals. Even the paints and glues we’ve used on the home are earth-friendly.”