This elf prefers a low profile 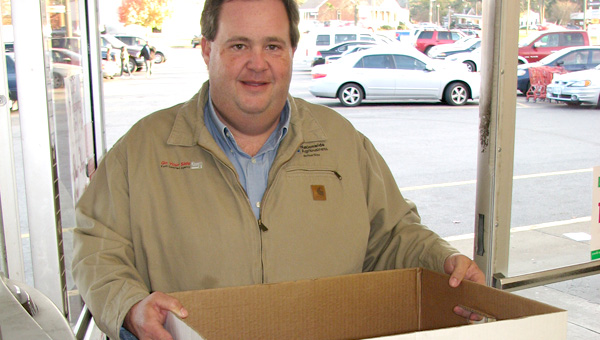 Volunteer: Hunter March began volunteering with Toys for Tots when he was about nine years old. Now, he is the co-coordinator of the effort in Suffolk.

Hunter March has been volunteering with Toys for Tots since he was in grade school.

Every year, Billy Ashley, who initiated the program in Suffolk, and his team of volunteers with the Suffolk Association of Life Underwriters would set dumpster-sized red bins around town for people to donate toys in.

As the holiday drew closer, volunteers would collect the toys and separate the toys from the trash that had been put into the bins.

“My dad used to throw us boys inside the bins and we’d sort through the toys and trash and throw out toys into boxes,” March said. “That’s how it all started for me.”

March, now 41, is the co-coordinator of the Toys for Tots program in Suffolk and responsible for anything he can do that is behind the scenes.

March is a Nationwide Insurance representative and involved with the Ruritans, as an assistant Scout Master in Boys Scouts, a baseball coach, in hunt clubs, Holy Neck Christian Church, as vice president of NAIFA and with the Freemasons.

His heart holds a soft spot for Toys for Tots, which he was exposed to at a young age by both of his parents.

The Suffolk News-Herald’s Cheer Fund was established to provide funding for the effort, and about eight years ago the U.S. Marine Corps Reserve’s Toys for Tots program came in to lend a hand.

Together the effort will distribute 5,000 toys to children this year.

March’s father was a volunteer with the Suffolk Association of Life Underwriters with Ashley, and his mother worked with social services, which helped distribute the toys and select recipients, by helping repair torn dolls and teddies bears.

“We just took whatever we could get,” March said. “We cleaned them and fixed them up.”

At the age of 13, March chose to do his Eagle Scout project on Toys for Tots in Suffolk by setting up boxes throughout town, canvassing neighborhoods, doing door-to-door pickups and volunteering at different events.

Since his original volunteer days with the program, the large red bins filled with old toys have become smaller boxes filled with new toys.

March is no longer in charge of climbing inside the boxes, but he is responsible for distributing and collecting many of them.

This year, March has already distributed about 60 Toys for Tots boxes.

“I guess it’s a benefit of being your own boss,” March said. “I come in, I work a little, I go pick up or drop off boxes and before you know it, it’s 4 p.m. I’m more than happy to volunteer my time.”

March likes to stay behind the scenes, but when it’s needed he’s willing to be the face of Christmas.

“I’ll do last-minute deliveries when kids need it,” March said. “Otherwise, I really just prefer to do the work and not get any credit for it.”

He has taken the initiative to take toys to a family whose house burned down shortly before Christmas, and delivered toys at 9 p.m. on Christmas Eve to a family whose parents worked at the cotton gin and whose four children wouldn’t receive any gifts that Christmas. One of their children attended school with March’s daughter.

“They were shocked and so surprised when I showed up,” March said. “They didn’t know me from Adam, but they were all big smiles. That’s what Christmas is all about. It’s always good to see the good being done, but it’s just not about what I’m doing. I like staying under the radar.”

This year, John Woleben, coordinator of the Toys for Tots effort in Suffolk, has brought March in on more of the duties by having him to help buy toys.

“There is so much that goes on with collecting and distributing 5,000 toys,” March said. “There are a lot of different people and organizations that play a huge role. John does so much work, and I’m really just here to help out with whatever I can to make sure this keeps happening. Every child should have a toy on Christmas. I just do what I can to help make that happen.”