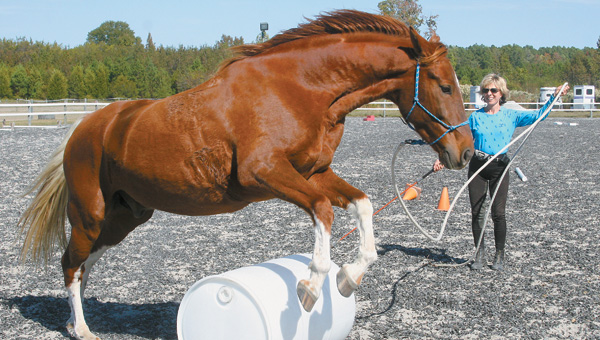 Sharon Morgan works in a rink with her horse Apollo, the leader of the “Frat Boys.” Morgan has been housing Apollo at HorseSpa Farm since it opened.

Wendy Parker had dreamed of the day she would open her own horse farm, where her horse could run, roam and kick up dust with other horses, instead of being in a stall.

With one drill of a posthole, her dreams found justification.

In 2003, standing within what was once a cotton field, Parker drilled one posthole for practice, to see how the equipment worked.

“The second post was the real thing,” she said.

She shoved the drill down into the dry earth and pulled it back up.

At the end of the drill was a horse’s lead line, brown and cracked from age.

“It was kind of eerie, but a confirmation that we were building something good,” Parker said.

Parker called the previous owner, who confirmed that horses had been kept on the property to help with the farming about 50 years ago.

Now, seven years after Parker put in that first post, 34 horses roam the extensive acreage at HorseSpa Farm near Chuckatuck, off Crittenden Road.

Watching the herds peacefully graze or ride the trails surrounding the farm, it’s easy to forget that the 158-acre farm is just a few miles from busy I-664.

It’s also easy to see why the owners of 34 horses, many of whom live in Portsmouth, Chesapeake and Virginia Beach, keep their beloved animals in Suffolk.

“That’s why we bought the land here,” said Parker, who lives in Norfolk. “We looked all around Hampton Roads for good land at a good price. This was originally not listed, but our real estate agent knew the owner had been trying to sell it. When we saw it, we knew we had to have it. I fell in love with it.”

While Suffolk is no Middleburg, the 430 square miles that are situated near the rest of Hampton Roads have attracted horse owners and equine-related businesses for years.

“Suffolk is the perfect environment for this kind of lifestyle,” said Mary Rombs, who owns Liberty Arabians with her husband, Bob. “I don’t think we’d ever leave Suffolk. It has everything we need.”

Halfway across the city from the HorseSpa Farm, Liberty Arabians is nestled on 26 acres off Lake Cohoon Road. Since founding the farm in 1985, Mary and Bob Rombs have focused on breeding Arabians, boarding clients’ horses and training them in “natural horsemanship.”

Natural horsemanship is based on working with the animal’s intellectual abilities, rather than trying to physically overcome the horse or use fear to motivate it.

Horses bred and trained there have earned Liberty Arabians national recognition and have won national, state and regional championships and numerous accolades.

Mary and Bob Rombs breed one or two foals every other year and train them in the discipline that seems most fit, whether that be western trail riding, jumping, dressage or something else entirely.

Their passion for horses grew from the time Bob spent riding on his grandfather’s ranch and the time Mary rode as a child in her native Germany.

Not long after marrying, they decided they wanted to start a farm.

“We searched high and low for somewhere to build,” Mary said. At the time, they were living in Virginia Beach, “and there was a lot of development going on. The right piece of property was hard to find, and if you did find one it was expensive. Suffolk had a lot of raw property.”

Since building the farm and the stables, the couple has stayed put in Suffolk.

Two of their friends from Virginia Beach and Chesapeake soon followed after them, one to establish another breeding farm, the other to build an equine hospital, which became Dominion Equine Clinic, providing service throughout southeastern Virginia, northeastern North Carolina and the Eastern Shore.

Even before they moved here, however, Bob and Mary said, Suffolk had quite a few horse farms and backyard horses.

“Even then, Suffolk was a huge equine area,” Mary said. “There is a lot of support from the agricultural community. There are several hay and seed stores and tack shops in the community. Those types of things are necessary to conduct a business or own a horse.”

Having a surgical facility in the area is also a draw for horse owners, Bob added.

But land and location remain the primary reasons Suffolk has attracted horse owners.

“There were a lot of horse farms, and a lot of people who wanted to have their horse on their property lived and were moving here because there was so much land,” Mary said.

“You’re seeing a lot more of that now, too,” Bob added. “Families buy five or 10 acres to have their horse in their backyard.”

“It’s certainly contributed to the growth of the area,” Mary said. “Over the years people from Hampton Roads are moving into Suffolk to have a horse, and if they aren’t, a lot of them are keeping their horses at a Suffolk farm, because there’s just so many of them.”

The Rombs have been around long enough to see old facilities change hands and to see the birth of a number of new facilities in the area, including HorseSpa Farm.

That farm started with just a handful of horses, but in just a few years grew to the maximum capacity with which owner Wendy Parker is comfortable.

“We started with just two horses,” Parker said. “By that summer, we already had seven or eight horses. By the end of the first year, we had 12, and the next year we had 20. Now, we have a waiting list.”

Various pastures have been set up to accommodate and feed the small equine community. As Suffolk has its boroughs, HorseSpa Farms is split into different pastures to accommodate each of its seven herds.

The Romeos are known for their charm. The Moody Mares are mostly older female horses with cantankerous attitudes. Their younger counterparts are the Sweet Tarts, whose mellower peers are the Cupcakes. The Stud Muffins have an attitude that comes across as chivalrous. The Homies are a tight-knit group of males, and the Frat Boys are a group of young thoroughbreds that like to play.

The horses live in their herds, and each herd has two or three pastures to graze on and a “sacrifice” area to romp and run in. Each herd also has its own run-in shelter for harsher weather.

“I can’t imagine how someone could ever look at a horse and believe it should live in a stall,” Parker said. “But we know that when they’re out and running around they can get nicked. So every day we inspect them to make sure everyone is okay. We want the horses to be as healthy as possible – both mentally and physically.”

The property includes a training area, three small hills for the horses to climb, 20 stalls mostly used for sick horses, a farmhouse where an employee lives and a rubber and sand ring to provide cushion for fallen riders training their horses.

There is also a Parelli training course to help train horses to do what might normally spook them — such as crossing bridges — and winding trails around the property and through part of a forest offer a relaxing ride. Lone Star Lakes Park is just around the corner for riders who want a change of scenery.

“We love the trail rides,” said Sharon Morgan, who owns Apollo, the leader of the Frat Boys herd. “It’s so wonderful here. It’s the best place I’ve ever kept any of my horses. My horses get the best treatment here. It’s so peaceful here. People come here to relax. It’s safe and quiet.”

From a farm with a name like HorseSpa, it is, perhaps, not surprising to learn that there is a concentration on equine fitness of all kinds.

One program at the farm, for example, offers equine-assisted psychotherapy, which has been effectively used to treat human behavioral issues like attention deficit disorder, substance abuse, eating disorders, depression, anxiety, relationship issues and communication problems. All sessions are supervised by a clinical social worker and an equine specialist trained through Equine Assisted Growth and Learning Association.

“It’s a good feeling knowing the horse can live in peace and be healthy,” Parker said. “I just don’t know how people can look at a horse and think it should live in a box. After we opened, I was driving down Crittenden Road and saw three or four women trotting down the road and I thought ‘This is it. This is what I wanted to create,’” Parker said.