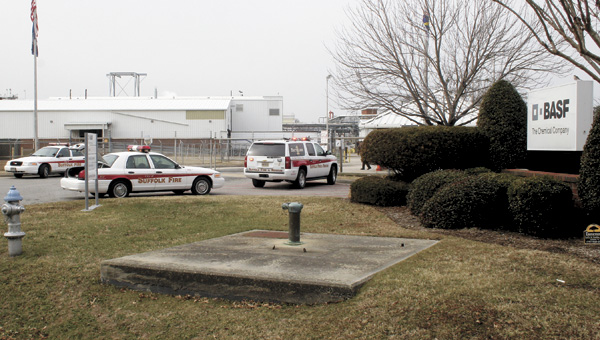 Suffolk Fire & Rescue and the BASF Emergency Response Team both responded Monday morning to a fire at the BASF plant on Wilroy Road. Employees were moved to another part of the site, but no neighbors were evacuated.

A smoldering fire in a piece of equipment at the BASF plant on Wilroy Road on Monday morning resulted in a hazardous materials response by Suffolk emergency crews.

City firefighters, rescue personnel and police responded at about 10:56 a.m. to a report of a fire in the company’s Acrylamide processing plant.

A fire alarm and automatic shutdown were activated when sensors indicated a rise in the temperature of a thermal oxidizer pollution control device, according to Patrick Hochstrasser, BASF’s Suffolk site manager.

The plant was shut down and its personnel were evacuated to another location on the BASF site while company and city emergency workers extinguished the fire.

“There were no employee exposures or injuries, and air monitoring results at the plant site and along the fence line were normal,” Hochstrasser said in a press release late Monday. “Damage was minimal.”

The smoldering thermal oxidizer would have released some volume of acrylonitrile, a chemical that is listed by the National Fire Protection Association as being flammable, reactive and toxic.

Hochstrasser said emergency officials had not yet determined how much of the chemical had been released into the air, but he was confident it was “a minimal emission.”

“(W)e do not anticipate that we exceeded regulated permit levels,” he stated in the press release.

Wilroy Road remained open throughout the incident, and there were no evacuations of nearby residents or businesses. Suffolk Fire & Rescue declared the situation under control at 12:55 p.m. and left soon afterward.

“BASF regards protection of health, safety and the environment as our most important responsibility,” Hochstrasser said. “We care about our employees, and we care about our communities. We are committed to operating facilities in a safe and environmentally responsible fashion.”

Repeated outbursts by a defendant usually don’t work in his favor in court, but it was a different story Monday.... read more