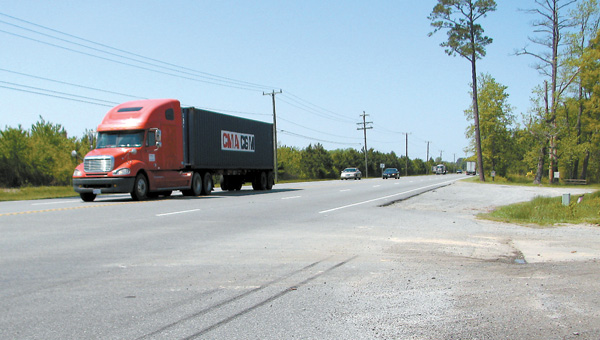 Transportation: A container truck rolls along U.S. Route 460 this summer. A massive plan to make transportation improvements in Suffolk is rolling along through the General Assembly. The House of Delegates voted in favor of the bill on Friday.

Governor Bob McDonnell’s transportation plan, which calls for borrowing billions of dollars to finance 900 road, rail and transit projects across Virginia, is moving through the General Assembly.

On Friday afternoon, the House of Delegates voted 65-33 in favor of House Bill 2527, giving final approval to its version of the plan.

“We took a major step forward today in our efforts to put the largest injection of funding into the commonwealth’s transportation system in a generation,” McDonnell said in a statement.

The plan would not only relieve traffic congestion but also create jobs, McDonnell said.

“We have proposed the single largest investment in our transportation system in a generation,” he said.

The governor said he was pleased with what he sees as growing bipartisan support for his plan.

Of the nine Democrats on the Senate committee, seven supported SB 1146. Five Republicans on the panel also voted for the measure.

The two committee members who voted against the proposal were Democrats Mary Margaret Whipple of Arlington and Henry Marsh of Richmond.

SB 1146 and HB 2527 would fund about $4 billion in transportation projects — with the state borrowing about $3 billion. The projects would include:

They are among 16 “mega-transportation projects” in the plan.

McDonnell this week cited a study saying the projects would help stimulate the economy.

Virginia’s economy would expand by $4.1 billion and support about 57,000 more jobs if the 16 mega-projects were completed, according to the study by Stephen Fuller, a professor in George Mason University’s School of Public Policy and director of its Center for Regional Analysis.

“This report recognizes that these types of investments not only impact our quality of life, reduce congestion and make Virginia more attractive to businesses looking to grow in the Commonwealth, but they have a direct impact on our economy and support job growth in these times when Virginia needs it most,” McDonnell said.

But the plan’s critics say it puts the state too deeply in debt. Moreover, the plan would divert money from the state’s general fund, which supports education, law enforcement and other core services, said the House minority leader, Delegate Ward Armstrong, D-Martinsville.

“What we’re doing is robbing schools and taking money away from police officers,” said Armstrong, who voted against the plan.