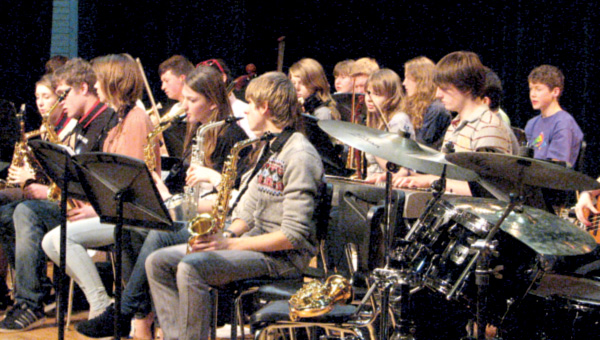 Band: Performers from the Bury St. Edmonds Upper County School from Suffolk, England rehearse in preparation for their performance on Friday at King’s Fork High School. The group is in the Suffolk, Virginia through a Suffolk Sister Cities International exchange program. They will perform at Nansemond River High School on Tuesday.

On their second trip to the United States, Evy Coe and Tom Rook recognize differences in themselves and between their county of Suffolk, England and the city of Suffolk, Virginia.

Coe and Rook are in year 13 at the Bury St. Edmonds Upper County School in England, which roughly translates to the twelfth grade year in American schools. This is their second visit to Suffolk, Va., through the Sister Cities International exchange program.

Coe and Rook acknowledge the changes they see in themselves. Since their last visit they have evolved from rookies to taking an active role in the group. They also notice the differences between the two countries on this second trip. “You take things in the older you get,” said Coe.

Coe and Rook are again getting used to the difference in schedules here and in England. “I’m not used to getting up that early,” Coe said.

In England the two don’t have to be to school until 9 a.m.

Rook and Coe are used to walking to destinations rather than having to drive everywhere. “Everything seems much bigger here,” Coe said.

Coe notices differences in the way people respond to her in the States. “I definitely notice how friendly and welcoming everyone is.”

“Everyone has been very generous,” Coe said. “The sense of community is really strong.”

The group arrived Wednesday night and they have been busy ever since. They had a concert the next morning at Nansemond-Suffolk Academy where they spent the day teaching NSA students about British history.

“I did quite enjoy the concert played at Nansemond-Suffolk. The audience was very good. They kept it going, really,” Rook said.

The students took a bus tour of Suffolk, visiting Riddick’s Folly and the Mr. Peanut statue on the corner of Washington and Main streets.

Yesterday they visited MacArthur Mall and attended a Norfolk Admirals game, where they performed “The Star Spangled Banner.”

In the next few days the group will be visiting Jamestown, Virginia Beach, and Washington D. C. They will also shadow their host students at school.

The next public performance will be held Tuesday at Nansemond River High School at 7 p.m. “We have quite a range of stuff,” Coe said.

“I think it should go quite well. I’m looking forward to it. Hopefully, the community will look forward to it as well,” Rook said.