Making saves around the world 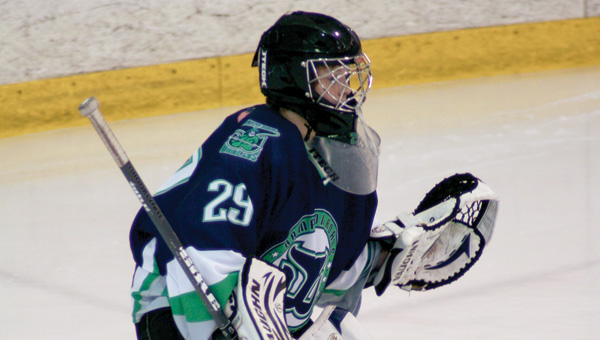 Europe tour: Ben Shapiro, a seventh-grade ice hockey player from King’s Fork Middle School, will embark on a European tour next month to play hockey in Italy, Austria and Germany with the Selects Cougars. The trip also will feature visits to several historical sites, including Dachau Concentration Camp in southern Germany.

When Ben Shapiro heads out for a road game as the goaltender for the Hampton Roads Whalers, the nearest opposing rink is three hours away in Charlottesville.

Many weekends mean Ben, thanks to his parents Steve and Debra, is traveling to points much more to the north such as Pittsburgh, Philadelphia, New Jersey and Maine.

Right now, though, Ben, a seventh-grader at King’s Fork Middle School, is looking forward to a road trip sure to be memorable even compared to his crazy, year-round travels of stopping slap shots up and down the East Coast.

As a goalie on the Selects Cougars 1998-99 team, a team of top youth players from the United States and Canada, Ben will take on opponents in Bolzano, Italy, Salzburg, Austria and Munich, Germany on a 10-day trip starting April 17.

Ben got the invite onto the team from his play in a skills development camp in New Jersey, so hockey competition is certainly a main goal on the trip.

Outside practices and games, though, the Cougars will go on guided tours of Bolzano, Salzburg and Munich. They will see historic castles in the middle of the Alps.

Likely the most interesting, but also the most difficult, place the kids and parents will see is Dachau Concentration Camp in southern Germany.

“This is certainly also about the education part of the trip, too,” said Debra, who’s a teacher at King’s Fork Middle School.

“There are going to be experiences most American kids don’t get to have at this age or any age,” Debra said.

Ben’s dad is a northern native, from Pittsburgh, and Steve’s a serious Penguin fan. Ben though, is a native Suffolkian.

“When I was two years old, my dad was watching a Penguins game on TV,” Ben said. “I said, ‘I want to be Mario Lemieux.’”

Ben was persistent, so skating lessons started at age three and he started playing at four. He was a three-year veteran as a skater before he switched to goalkeeper.

The Whalers, with which Ben’s been playing up one age group, with the 14-and-under team, this past season, play 40-50 games a season.

“I was the only goalie on the team, so I played every game,” Ben said.

Most of the Whaler opponents hail from the D.C. and Maryland area. Weekends include as many as four games. Ben and the Whalers have brought trophies home for winning the Gatorade AAA Summer Challenge in Voorhees, N.J., and for finishing runner-up at Lobster Fest, Portland, Me.

As a 10-and-under player, Ben was in a tournament with the Whalers when a Philadelphia youth team needed an emergency goalie. Ben switched jerseys for a bit and obviously must have played well.

The coach of the Philly club runs the Selects Cougars program around the Philadelphia region and he invited Ben. Ben’s been attending the Cougar Skills Development Program regularly, meaning quick back-and-forth trips to New Jersey on Sundays, since then.

Pittsburgh goalie and Stanley Cup-winning goalie Marc-Andre Fleury is Ben’s role model for his play in the crease.

“He’s one of the greatest goalies today because of how he moves and how he plays the game,” Ben said.

Martin Brodeur, New Jersey’s goalie for the past 20 years, is a close second.

Ben met Fleury and got his autograph a couple years ago in Norfolk while Fleury was rehabbing an injury in the AHL before returning to the Penguins.

Watching the NHL Network is routine in the Shapiro home. With the non-stop schedule on the ice though, Ben has yet to see an NHL game in person. He takes lots of lessons from seeing the world’s best goalies on TV.

“I learn I shouldn’t flop around all over the place, but sometimes when you do that you make really good saves,” he said.

With the Selects Cougars organization, a major milestone would be getting an invite to the North American Prospect Showcase, says Ben.

As for the upcoming tour of Italy, Austria and Germany, the Cougars are spending three days in each city and playing six games in all.

To go from Suffolk to playing hockey throughout Europe is pretty big already.