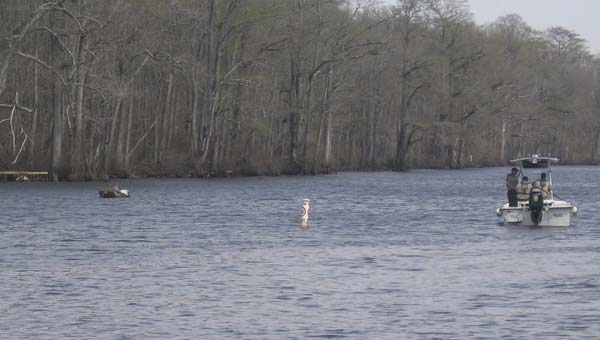 Staff with the Department of Game and Inland Fisheries search the Nottoway River for a missing boater. His body was found around 8 p.m.

A Suffolk man died when the boat he and two other Suffolk men were riding in capsized on the Nottoway River Monday.

Officers with the Department of Game and Inland Fisheries recovered the body of George Beale, 46, after 8 p.m. It was located within 50 yards upstream of where the boat capsized near the General Vaughn Bridge boat landing in Southampton County.

The other two boaters, James Harrell and Roderick Copeland, were rescued by a team of aquatic biologists that had arrived at the river to do a survey on freshwater mussels.

According to Julie Dixon, spokeswoman for the game department, Harrell and Copeland were transported to Southampton Memorial Hospital and treated for hypothermia. They reported that the three had launched their boat at approximately 8:30 a.m., and the boat capsized soon afterward.

Sgt. T.J. Worrell, a conservation police officer with the department, said Beale was fishing with James Harrell and Roderick Copeland.

Apparently the craft tipped over “when one of them stood up and got off balance,” Worrell said. The two rescued boaters later reported that Beale went under and disappeared.

Mitchell Norman, one of the rescuers, said he was just beginning to prepare the boat when “I saw the capsized boat and only one man waving and yelling. I knew it was a crisis situation.”

He immediately went out in his craft and pulled the two men into it.

He added the two fishermen had been in 57-degree water for about one hour. He estimated that the boat was just 300 yards from the landing site and that the river’s depth at the spot point where the men were found is about 17 feet.

He said that in addition to his team, other responders included officers from Franklin Fire and Rescue, the Southampton County Sheriff’s Office, a MedFlight helicopter and the Coast Guard.

Beale’s body was recovered by a game department team using side scanning sonar.

During the search, family and friends of Beale stood on the riverbank watching the search boat travel up and down the Nottoway.

With them were Charles Newton, his stepfather, and Beale’s mother, Eva Jean, also both of Suffolk. The wife, Annette, was being comforted privately. The couple has three children.

“Yes, he (Beale) did know how to swim,” said Newton as his eyes scanned back and forth along the river. Like the others, he’d been hoping that his stepson made it to the side.

The fishermen were not wearing lifejackets, but had flotation devices on board the boat, Dixon said.